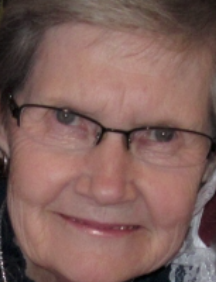 Margaret E. Dodge, 96, of Mason City, Iowa, passed away peacefully on Wednesday, May 4, 2022. A funeral service will be held at 10 a.m. on Wednesday, May 11, 2022, at Major Erickson Funeral Home, 111 N Pennsylvania Ave. Visitation will be held one hour prior to the service. Interment will be held in the First Lutheran Cemetery in St. Ansgar. Memorials may be directed to Alzheimer’s Research.

Margaret E. Dodge was born on August 16, 1926, in Mason City to parents Rasmus and Anna (Flo) Nesje. Margaret grew up in Mason City and graduated from Mason City High School. Margaret worked for the Northwestern Bell Telephone Company and did so for 11 years. Margaret and Alan Dodge were united in marriage on December 4, 1961, and together they raised their 6 children.

She was an active member of Trinity Lutheran Church where she volunteered her time and talents when needed. She thoroughly enjoyed spending time with her family and friends and was a well renowned baker according to her grandchildren. She was especially known for her famous n chip cookies and her delicious homemade cinnamon rolls. Margaret had a deep-seeded love and faith in her Lord and Savior.

Left to cherish her memory is her son, David (Rita) Dodge of Duncan, SC, and her three daughters, Vickie (Tom) Gay of Wyoming, Jane (Tim) Browning of Brainerd, MN and Julie (Tom) Birdsall of Mason City. Margaret and Alan were also blessed with 18 grandchildren and 36 greatgrandchildren and many nieces and nephews.

Margaret was preceded in death by her parents, her loving husband, Alan Dodge and her two sons, Mark Dodge and John Dodge and four sisters and two brothers.
May her memory be eternal.