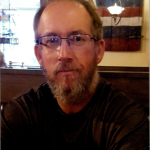 Steve graduated from Armstrong High School in 1988. Steve was employed at Art’s Way for many years. He was most recently employed as a hired man on the farm for Dick Sturm. He was united in marriage to Connie (Van Lenning) Holl on January 1, 2022 at the United Methodist Church in Armstrong.

Steve was a member of St. Mary’s Catholic Church in Armstrong. He enjoyed bowling and was a member of the Bowling Association. Steve enjoyed spending time with his cats and watching the Braves. Working on the farm was a favorite pastime of his. He had a love of cars, owning many that had sentimental value to him.

Steve is preceded in death by his parents John Jr and Delores Rezac, and his grandparents.