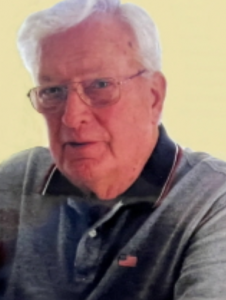 A visitation will be held from 10:30a.m. until the start of the service.

Gerald Kay Dawley, the son of Clifford and Irmel (Bonsall) Dawley was born May 9, 1927 in Floyd County, Iowa. He attended school and graduated from Charles City High School. He served in the United States Marine Corps during WWII. He married Arlene (Valeske) on December 18, 1949 in Charles City, Iowa. For the majority of their married lives, Gerald and Arlene made their home in Eagle Grove where Gerald worked as the Administrator for the Rotary Ann Home & Complex for over 25 years. After retiring they moved to Arizona where they resided for 17 years before returning to Charles City.

Gerald enjoyed fishing in Canada, playing cards, dancing, visiting with friends but especially connecting with his grandchildren and all of the family pets. He was raised on a farm and the love of farm life never left him.

He was preceded in death by his wife, Arlene, his parents, his sister, Bonnie Kruse, and his brother Lowell Dawley.

Memorials may be directed to a charity of your choice.