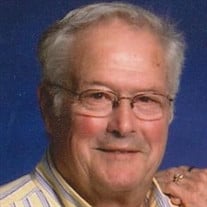 Thomas Reding, age 82, of Algona passed away surrounded by his wife and daughters on Monday January 31, 2022 at MercyOne Hospital in Des Moines. Mass of the Christian Burial will be held at 11:00 AM on Friday at Divine Mercy Catholic Parish – St. Cecelia in Algona. Burial will be in St. Joseph Catholic Cemetery in St. Joseph, with military rites conducted by the Iowa Army National Guard Honor Guard. Visitation will be 9:00 – 10:45 AM Friday at Lentz Funeral Home, with an 8:45 AM Rosary.

Thomas Michael Reding, the son of Frank and Elizabeth (Noonan) Reding, was born on June 6, 1939 on their farm near St. Joseph, Iowa. He graduated from St. Joseph High School in 1957. Tom served his country in the U.S. Army from 1960-1963. On February 20, 1965 Tom was united in marriage with Phyllis Dimond at St. Cecelia Catholic Church in Algona. He farmed and raised cattle until the1980’s and then worked at Reding’s Gravel and Excavating driving the gravel truck.

Tom enjoyed following the Iowa State Cyclones and the Chicago Cubs. He also enjoyed traveling, playing cards especially Black Jack. Tom cherished his time with his family and showed patience as he taught his daughters and grandchildren how to drive.