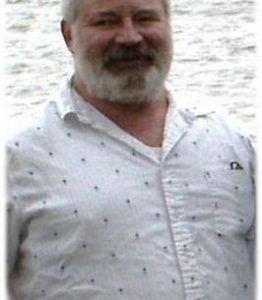 At a young age he, along with his family, moved from nearby Ceylon, MN, to Estherville where he resided most of his life. He would go on to have various residencies but Estherville was always home and it’s where he would spend the later half of his life. On June 25th 1980, he would be married to Anne Farlin and they would have 3 children Amanda, Joshua and Jacob. After separating from Anne, he would work various construction and manufacturing jobs along the way including Arts Way in Armstrong and Holiday Express in Estherville. During his time at Art Way, he met Kari McDermott, and together they had one child Timothy.

In his down time, Dave used his handiness that he learned on the job to help others out with projects, especially with his son Tim. He could also be found (and probably heard) watching and yelling at the Vikings, Twins and Hawkeye games on the TV. He also enjoyed guessing along daily to Jeopardy as well as watching and rewatching old westerns and criminal mystery shows.

Left to cherish Dave’s memory are his mother Barb Soper of Estherville, his significant other of 35 years, Kari McDermott of Estherville, His brother Clarence “Benny” (Connie) of Winner, SD, His children: Amanda of Cheyenne, WY, her son Spencer, Josh of Sioux Falls, SD, his daughter Madelynn and her two sons Elijah and Oliver, Jake (Jenni) of Oxnard, CA and his son Grant, Tim (Liz) of Spirit Lake and their child on the way, Uncle Darrell Soper of Albert Lea, MN, and Aunt Judith Buck of Mason City. Uncle Dan and Aunt Diane Westerlund of Naples, FL. Aunt Jane Wallace of San Marcos, CA. As well as many other extended family members and friends that were like family to him.