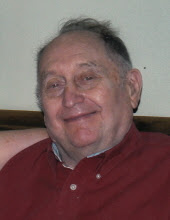 Dean Duit, 93, of Iowa Falls, passed away on Monday, December 20, 2021 at the Hansen Family Hospital. Funeral services will be held at a later date. Funeral arrangements are under the guidance of the Surls Funeral Home in Iowa Falls.

Dean was born November 18, 1928, in rural Ackley to John and Sarah Duit. He graduated from the Geneva High School in 1946, and served in the United States Army from 1950 to 1952, stationed in Germany. In 1955, he married Patricia Palo in the Alden Methodist Church and they were blessed with four children, Sheryl, Diane, Steven and Jeffrey.

Dean was a hard working honest farmer who had many talents and interests. He was good with numbers and enjoyed doing carpenter work. He served as a committeeman for the Franklin County ASCS. His favorite music was hymns and patriotic songs. He enjoyed sports and coached the Geneva Little League baseball team. He loved God, his family and his country. He was a member of the St. Peter’s U.C.C. rural Geneva where he sang in the choir, taught Sunday School and served on the church board.

Dean suffered a stroke in 1999 while wintering in Texas and for the last 22 years has fought a brave battle with life, spending the last 8 of those years at Scenic Manor where he received excellent care from his Scenic Manor family.

Dean was preceded in death by his parents, Sarah and John Duit, his parents-in-law Gladys and Bill Palo, his daughter and son-in-law Sheryl and David Harrison, his brother Arlon Duit and his brothers-in-law, Roy Ritland, Robert Palo and Merle Palo.