College Basketball: Iowa State’s Brockington is once again Big 12 Player of the Week 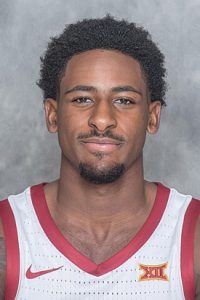 Brockington, who shared the player of the week honor with West Virginia’s Sean McNeil, led the Cyclones to a win against Chicago State in the Cyclones’ only game last week, posting his sixth double-double of the season with 20 points and a career-high tying 13 rebounds to help the Cyclones improve to 12-0 this season.

The transfer from Penn State and Philadelphia native also matched his career high with four steals and was 8-for-8 at the free-throw line.

Brockington ranks in the top three in the conference in scoring (third) and rebounding (second), averaging 16.9 points and 8.4 rebounds. He is also sixth in field goal percentage (50 percent).

Brockington and the No. 8 Cyclones return to action New Year’s Day when they host top-ranked Baylor at 1 p.m.