The fruits of his labor have paid off on the recruiting trail, as the Cyclones announced their early signees of the 2022 class today.

This year’s class is the highest-rated in school history, and it’s not even close. Campbell and his staff have completed a December signing period class ranked in the top-30 in all three major recruiting services. The 2022 Cyclone class is rated No. 22 nationally and third-best in the Big 12 by Rivals, and 247Sports rates it as the third-best class in the Big 12 and 24th overall.

Campbell is excited to bring this talented group to Ames.

“We could not be more thrilled to welcome this 2022 class into our football program,” Campbell said. “This group has believed in our program and the vision we have. We are grateful to continue to build with them leading the way. It is a well-balanced, talented class that we believe can make an impact on our program immediately and over the next five years. We have always believed in recruiting high-character young men who have a passion for academics, and a genuine love for the game of football. This group embodies those values and we are thrilled to build our future around them.”

Gaines III led his Tampa Bay Tech team to an undefeated record and a state championship game appearance on Friday. A top-40 wide receiver nationally, Gaines III has 32 touchdown catches in his career.

Deyo, a four-star recruit by Rivals, 247Sports and On3, headlines a group of four Iowans in this class in TE Gabe Burkle (Cedar Rapids), LB Jacob Imming (Sergeant Bluff) and Will McLaughlin (Defiance). Deyo was a Des Moines Register Elite Team All-State member and Imming and McLaughlin were both first-team all-state selections and ranked as the No. 5 and No. 6 players in Iowa, respectively, according to 247Sports.

Campbell has always placed a priority on recruiting players out of winning programs, and this year’s class features 10 players who have won or are currently competing for a state championship. McLaughlin (Harlan) and Deyo (Lewis Central) led their programs to state titles in Iowa, while Andrew Keller (Waunakee, Wis.) played a huge role in leading Waunakee H.S. to an undefeated (14-0) championship season. 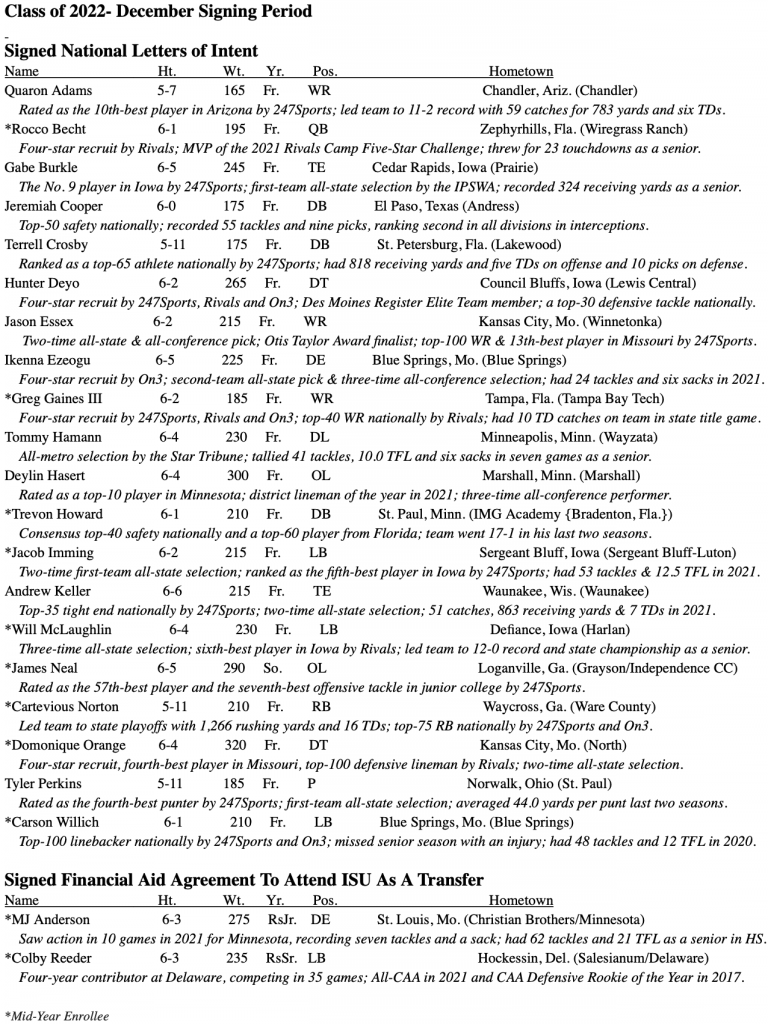