In a game where the bench dominated, the Panthers put up a program high in points and assists against the Yellowjackets. Each player that hit the floor for UNI through 40 minutes scored at least 5 points with six players in double figures.

“I thought we played extremely well from start to finish on both ends of the floor,” said Head Coach Tanya Warren. “I think it’s easy when you get up big to get complacent, which we talked about at the half. I think we’re progressing as need be and as we expect to be. We’ve played very good basketball for the most part. We tripped against a very good Creighton team but made headway against a great South Dakota State team. We talked about that we’re going to fall, but we need to fall forward. Which is exactly what we did.”

It was a quick start for the Panthers as junior guard Kam Finley scored the first points of the night with a driving layup into the paint 20 seconds in. The birthday girl would follow the layup with a 3-pointer from the key. UNI would keep the scoring up throughout the first as they went on an 8-point run in the middle of the quarter. The Yellowjackets would get momentum back after the run as they scored 9 points in a row. The Graceland run would be ended by senior guard Nicole Kroeger with a 3-pointer that she would repeat less than 30 seconds later. The first quarter would also be the Panthers best on the floor, shooting over 60% from the floor and the arc with a perfect percentage at the charity stripe.

The second quarter was another dominant one for the Panthers as they limited the Yellowjackets to just 4 points. The UNI defense set a record scoring margin of the fewest points allowed in a 2nd quarter by keeping Graceland to just 4. The Panthers began the quarter with a 6-point run before the Yellowjackets would breakthrough with their first field goal. UNI would then have their best scoring run of the game, making 11-points in the last 3 minutes of the quarter.

To start the second half the Panthers would have a couple of shots at the rim that didn’t fall. UNI would get their first points of the half a minute and a half in from junior center Cynthia Wolf to go on a 15-point run over four minutes. It would be a fairly quiet final 4 minutes of the quarter as both teams only had one layup. The Panthers would get three buckets at the free-throw line. But redshirt-junior guard Kiana Barney would make a trey from the top of the key to end the 3rd, keeping Graceland to only 4 points for a second straight quarter.

The Yellowjackets would get the first point of the quarter off a free throw shot. But UNI would answer back with another Barney three from the corner. The teams would trade baskets back and forth for the next 4 minutes with the largest run being 5-points from the Panthers. UNI would end the game with a 9-point scoring run for 3-minutes as Graceland got their last basket of the game in the final minute. The Panthers would close it out with a driving layup from freshman guard Kayba Laube at the 45-second mark, marking the program’s first 110-point win.

In individual scoring, freshman guards Maya McDermott and Laube each had 15 points with 5 and 1 rebounds respectively. McDermott also led the team in assists with 7 helpers. Rucker, Kroeger, Gunnels, and Boffeli also had double digit scoring outings. Leading the team in rebounds was junior center Cynthia Wolf with 7 followed by McDermott and redshirt freshman forward Sara McCullough each with 5 boards.

UP NEXT:
The Panthers hit the road for a 3-game stretch over the next two weeks with the first stop being Sunday afternoon in Ames. UNI will take on the #15 Iowa State Cyclones at the Hilton Coliseum on Dec. 12. Tipoff is set for 5 p.m. 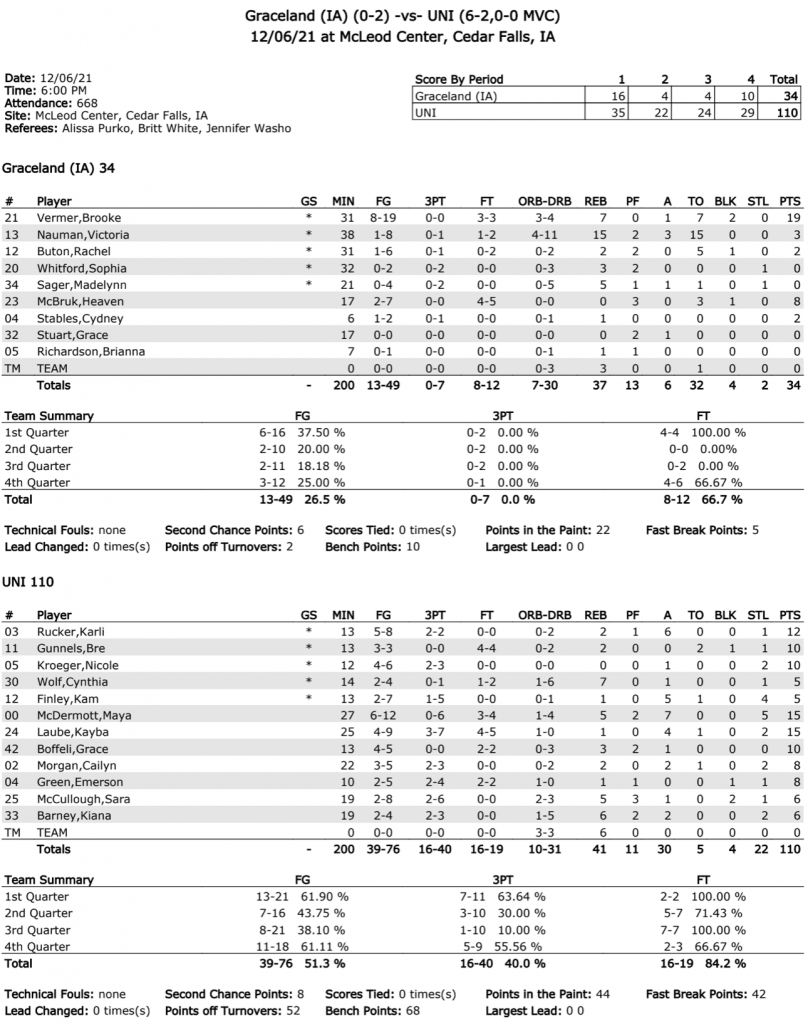