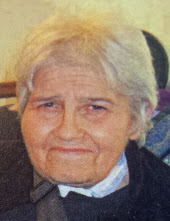 Peggy A. Linahon, 63, formerly of Clear Lake died Tuesday, November 16, 2021 at the Rehabilitation Center of Hampton.

A private graveside service will be held at Concord Township Cemetery in Garner at a later date. There will be no visitation.

Peggy Ann Linahon, the daughter of Calvin and Gail (Schaefer) Baumgartner, was born December 29, 1957 in Britt. She was later adopted by William Dale Linahon. Peggy lived in several places in Mason City and Clear Lake over the years. She helped with the Red Cross and was proud to be a part of a group that helped out after 9/11 in New York City. She experienced some health issues that prevented her from continuing her work with the Red Cross. Due to declining health, Peggy became a resident of the Rehabilitation Center of Hampton in 2014. Not wanting to give up helping or caring for others she made beaded necklaces with crosses to send to troops overseas. Peggy loved animals, having had several dogs and cats. She had to give up her beloved cat, Morris, when she went to the Rehabilitation Center.

Peggy is survived by her siblings, Calvin (Jan) Baumgartner of Garner, Sandy Jo (Mike) Bailey of Kalispell, MT and Mary (Steve) Gouge of Garner; and many nieces and nephews.

She was preceded in death by her daughter, Amanda; parents, Gail and Dale Linahon; father, Calvin Baumgartner; and her grandparents.