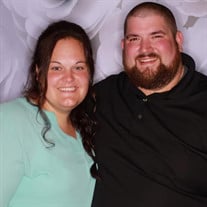 The family requests that casual attire be worn in honor of Alicia.

Alicia Ann Roth was born May 13, 1990 in Mason City, the daughter of Doug and Teresa (Tesch) Roth. Soon her younger siblings, Kaleb and Nikki joined the family and Alicia earned her role as older sister. She was protective of her siblings and loved them dearly. Growing up in the Mason City area she graduated from Mason City High School in 2008, later continuing her education at DMACC where she earned her Associates Degree in Accounting. In 2007 she began her life with her soon to be husband, Matt Linderman. The couple was married on October 3, 2010 in Mason City and have been blessed with two children, Addisyn in 2014 and Brayden in 2016. They made their home together in Webster City for the past 10 years. Alicia was a fabulous mother who always put her children first, a Mama Bear, you could say. She loved the two of them with everything she had.

Alicia was a social being, who enjoyed time spent with others. She dreamed of living on an acreage with her family, growing bountiful plants in their greenhouse. Alicia enjoyed spontaneous get togethers and nights spent with her siblings talking about life. She was strong willed and determined, when she set her heart on something, she made it happen. Alicia was never afraid to ask for help or guidance from others, and was always willing to give to others in a moments notice. She was a beloved mother, wife, daughter, sister, granddaughter, niece and friend to so many.

Preceding her in death are her paternal grandparents, Virgil and Betty (Calkins) Roth and Matt’s mother, Sandy (Chisholm) Linderman.