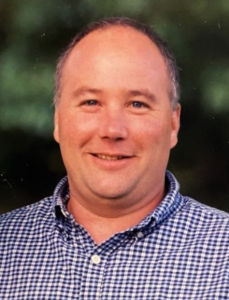 Patrick S. Duncan, 57, of Wellsburg, Iowa passed away peacefully at home on the evening of Thursday, October 7, 2021 surrounded by his loving family and under the care of Cedar Valley Hospice.

Funeral services for Patrick will be held at 11:00 a.m. on Wednesday, October 20, 2021 at St. John Lutheran Church in Wellsburg, Iowa with Pastor Bruce Zimmermann officiating. Public visitation will be from 4:00 – 7:00 p.m. on Tuesday, October 19, 2021 at the Doyen Abels Funeral Chapel located at 304 North Adams Street, Wellsburg, IA 50680. Memorial contributions may be made in Patrick’s name to his family which will later be designated elsewhere. For further information or to leave a condolence please visit www.abelsfuneralhomes.com. Doyen Abels Funeral Home is caring for Patrick and his family.

Patrick Steven Duncan was born on November 27, 1963 in Texas, the son of Robert Leonard and Rose Catherine (Dittman) Duncan. He was raised and educated in the Waterloo school district where he graduated from East High School. On July 19, 1986, Patrick was united in marriage to Cindy Bond. From this union two children were born: Melissa and Matthew. The couple later divorced. Patrick then was united in marriage to Lora (Berghoefer) Johnson on August 18, 2001, and helped raise her son, Cameron.

Patrick was a hard-working man and held numerous jobs during his lifetime. These include managing Pester-Derby gas stations in Waterloo, being a farm hand for several Grundy County farmers, driving fork truck at Richelieu Foods, detailing tractors at Phelps Implement and for the last several years mowing lawns and moving snow for people in Wellsburg. He was a member of St. John Lutheran Church in Wellsburg. He enjoyed making people smile by helping them and delivering treats to them. Patrick was well known in Wellsburg for his display of Halloween and Christmas decorations that he would put up every year at his home. In his younger years he enjoyed hunting and later decided he would rather enjoy watching the animals more than shooting them. He enjoyed spending time outside planting flowers and feeding the birds and squirrels. The most important thing that gave Patrick joy was the time spent together with his family and friends. He was extremely proud of his children and being able to watch them grow into adulthood. Patrick loved being a husband and dad.

He is preceded in death by his parents: Robert and Rose Duncan; one brother: Jim Duncan; one nephew: Jeremy Duncan and a brother-in-law: Dale Aikey.