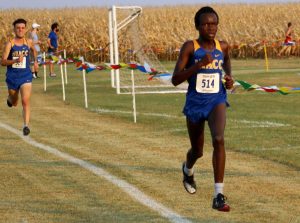 Kipkemboi, the defending NJCAA Division II champion, covered the rainy 8-kilometer course on the Les Bolstad Golf Course in a time of 25 minutes, 48 seconds in a race made up mainly of NCAA Division II runners.

It is the second time Kipkemboi has won the USTFCCCA NJCAA Division II men’s cross country athlete of the week. He also won the award in the 2020 season on Oct. 20.