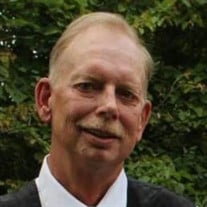 A funeral service will be held 10:30 am Wednesday, July 14, 2021 at Ward Van Slyke Colonial Chapel, 310 1st Ave. N., Clear Lake. Burial will follow in the Clear Lake Cemetery where military honors will be rendered by the Iowa Army Funeral Honor Guard.

The son of Clifford and Dorothy (Olson) Krambeer, Phillip Wayne was born on September 13, 1952 in Britt, IA. Growing up on main street Clear Lake, Phil enjoyed his weekly paper route, fishing off of the city dock, and forging ties throughout town. He attended Clear Lake High School and graduated among the class of 1971. Following high school Phil joined the Army National Guard.

On August 4, 1973 he was united in marriage to Rhonda Miller in Sioux Falls, SD, they lived in Clear Lake and Ventura except for a few years when they lived in the Waterloo area. During this time they were blessed with two daughters, Tara and April.

For many years Phil worked at Curtis 1000 as a multi colored printing press operator until his retirement. Phil faithfully served with the Iowa Army National Guard for 20 years including his last deployment to Desert Storm with the 1133rd Transportation Company. Phil’s military career was cut short of his 25 year goal after receiving a medical discharge.

Following the early passing of his wife, Rhonda, in 2001, Phil dove into his hobbies. He filled his time in the outdoors and loved hunting, fishing, and camping. He loved watching westerns with his animal companions while enjoying chips and dip! During this time he also enjoyed the company of his friends while sharing his construction experience.

On October 11, 2008 Phil was united in marriage to Lori (Post) Dickerson at the park in Fertile, IA. At this time he was blessed with three bonus children, Ben, Alex, and Brianne. Phil and Lori enjoyed camping, especially an adventurous trip to Wisconsin! They also enjoyed time spent with family, grandchildren and friends. Many Sunday afternoons were spent gathering with friends.

He is preceded in death by his parents; his wife, Rhonda; brother, Charles (Laura) Krambeer; brother in law, Ken Moeller; and many special friends.