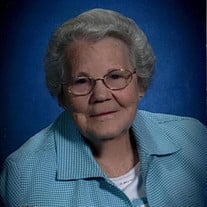 Per Izetta’s wishes, her body has been cremated and a memorial service will be held at a later date. Inurnment will be at Memorial Park Cemetery in Mason City.

Izetta grew up and attended school in Mason City. She worked 20 years as a tacker for Mode-O-Day in Mason City, before retiring.

Izetta was a member of Clear Lake United Methodist Church. She like to dance and crochet. She made so many items and garments for people that she probably consumed enough thread to go to Mars and back, if not further.