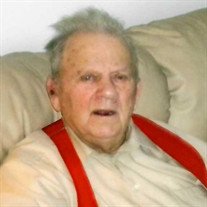 A visitation will be held on Thursday, April 8, 2021 from 5-7 p.m. at Fullerton Schumburg Funeral Home, 302 West Main, Rockford. A funeral service will be held at 1:00 p.m. with a one hour prior visitation on Friday, April 9, 2021 at the First United Methodist Church, 21 3rd St NW, Rockford, with Pastor Dennis Burns officiating. Burial will take place at Evergreen Cemetery in Britt, IA. Military honors will be performed by the Britt Honor Guard.

Ralph was born on March 20, 1930 in Britt, IA to Robert and Laura (Thompson) Martin of Britt and was a member of the Britt Congregational United Church of Christ. He attended school through the 8th grade and then began working on the family farm.

Ralph served in the United States Navy as a Metalsmith 3rd Class during the Korean War from April of 1951 and was honorably discharged in April of 1957. He was a very proud veteran. After being honorably discharged he worked several years at the iron mines in Minnesota as a welder. In 1960, Ralph purchased his first of many farms he owned throughout his lifetime in Rockford. Ralph enjoyed welding and farming; he would buy run down farms to fix-up in the surrounding area. His hobbies included going to auctions, collecting pottery and purchasing stock from the stock market. He was very intelligent, invested well and made every penny count. Ralph was a kind-hearted man and didn’t hesitate to help those in need. He was well liked by staff and residents over the last few years he resided at the Rockwell Nursing Home. His memory will be cherished by many.

Ralph was the “bonus dad and grandpa” of Scott and Robin Shafer and their daughters Jennifer and Jessica as well as their children; he was a special friend of Jan Faulkner, Herman Meyer, Marvin Gaubatz and too many others to list. He is also survived by his brother, Roger (Doris) Martin and brother-in-law, Gail Parker.