CEDAR RAPIDS – A man who displayed a firearm at a female victim at a Motel 6 in Waterloo, Iowa, in an attempt to dissuade her from contacting law enforcement, was sentenced on Friday to more than eight years in federal prison.

Devonner Coleman, age 30, from St. Louis, Missouri, received the prison term after a guilty plea to being a felon in possession of a firearm.

In a plea agreement, Coleman admitted he was found with a .22 caliber rifle with the barrel cut off, as well as approximately 118 grams of packaged marijuana. His fingerprints were found on the firearm and one of the baggies of marijuana. He had previously been convicted of possessing marijuana with the intent to deliver in Black Hawk County in 2009, 2011, and 2013. At sentencing, the victim testified that Coleman displayed the firearm at her, stating he does not mess with “snitches,” and later stepped on her foot and yelled at her while she was on the phone with a
9-1-1 operator.

Coleman was sentenced in Cedar Rapids by United States District Court Judge C.J. Williams. Coleman was sentenced to 102 months’ imprisonment and fined $100. He must also serve a three-year term of supervised release after the prison term. There is no parole in the federal system.

Coleman is being held in the United States Marshal’s custody until he can be transported to a federal prison.

The case was prosecuted by Assistant United States Attorney Liz Dupuich and investigated by the Waterloo Police Department and the Bureau of Alcohol, Tobacco, Firearms, and Explosives. 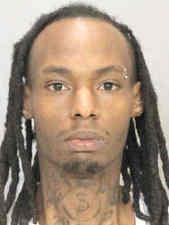