Iowa State hit 12 three pointers in the contest to bolster the offensive attack. It’s the seventh time this season, and third time in the last five games, that the Cyclones have hit 10+ threes in a game. The Cyclones also were tidy on the glass, collecting 58 rebounds on the night, which is the highest total on the year.

With the win in Allen Field House, Iowa State has secured a bye in the first round of the Big 12 Tournament next week.

How it Happened
The Cyclones came out scorching the nets from downtown. Iowa State held a 21-11 advantage after one quarter of action, with all 21 ISU points coming from behind the arc. In total five different Cyclones hit a triple in the first quarter.

Iowa State continued to utilize the three-point line for their offensive production in the second quarter. The Cardinal and Gold finished 10-20 from three in the first half and brought a 36-18 lead into the locker room.

ISU’s first-half defense was suffocating to complement its offense. The Jayhawks hit just 7-34 from the field, including 1-9 from three. Iowa State swarmed the glass as a team, hauling in a season-high 34 first-half rebounds while not yielding any second-chance points to the Jayhawks.

Iowa State cruised to victory in the fourth quarter. The Cyclones finished the game 12-29 from three. ISU held Kansas to 17-69 shooting for the game, including 3-21 from three. The Jayhawks’ 24.6% shooting percentage is the best defensive mark for the Cyclones this season.

It was a career night for Rae Johnson. She set new career-bests in three pointers-made (5) and blocked shots (3). She finished the night with a game-high 18 points. She added three rebounds and an assist to her stat line.

Ashley Joens was a force on the boards. She brought down an astounding 20 rebounds in the contest, which ties her career high that she notched earlier this season. She joins Angie Wellie as the only other Cyclone to record multiple 20+ rebound performances. She churned out three assists and came away with three steals on the defensive end. She finished the game with 10 points, which was good for her 16th double-double of the season. 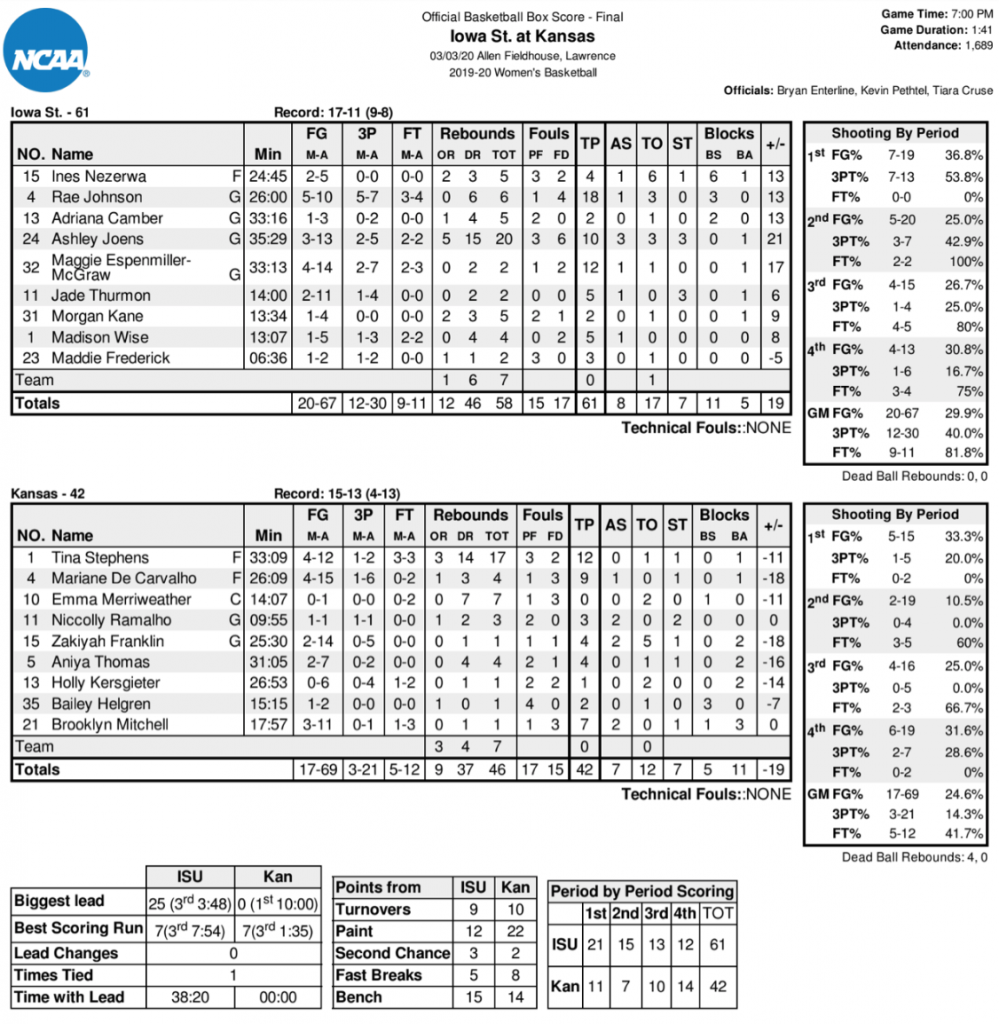