PEORIA, Illinois – The UNI men’s basketball team took on the Braves of Bradley University on Saturday afternoon, defeating the Braves 86-71 and now move to 16-2 overall and 5-1 in the MVC.

The Panthers entered halftime leading the Braves 38-36. UNI led by as many as 11 points in the first half but could not hold off a Bradley 10-1 run to close the gap to two with 5:27 remaining in the half.

UNI went 15-31 from the field and 3-10 from beyond the arc in the first half. AJ Green led the Panthers will 11 points, going 4-7 from the field and made both free throw attempts. Austin Phyfe finished the opening half with 7 points, going 3-4 in the paint and making one of two free throw attempts. The Panthers out rebounded the Braves 20-14 with Trae Berhow and Noah Carter hauling in a team high four rebounds.

The Panthers came out in the second half and outscored the Braves 48-35 to secure their 16th win of the season. UNI shot 50.8 percent from the field, downed 10 total three pointers and knocked down 12 of 14 free throw attempts.

AJ Green led the Panther scoring effort, totaling 25 points, Green now has recorded 20 or more points in 8 of the last 9 games. Green finished 7-15 from the field and 8-8 from the free throw line, Green remains perfect at the line in Valley play, making all 32 attempts.

Austin Phyfe finished 7 of 8 from the field for 15 points and recorded 3 assists. Tywhon Pickford added 11 points and Trae Berhow added 10 and let the team with 5 assists.

The Panthers will now travel to Carbondale, Illinois for an 8 PM showdown with the Salukis on Wednesday, January 22. The Salukis are 8-10 overall and 2-3 in the MVC with a game against Drake on Sunday, January 19 still to play. Wednesday’s MVC match up will be broadcast on Fox Sports Midwest, NBC Sports Chicago, Fox Sports Kansas City, and Fox Sports Indiana. 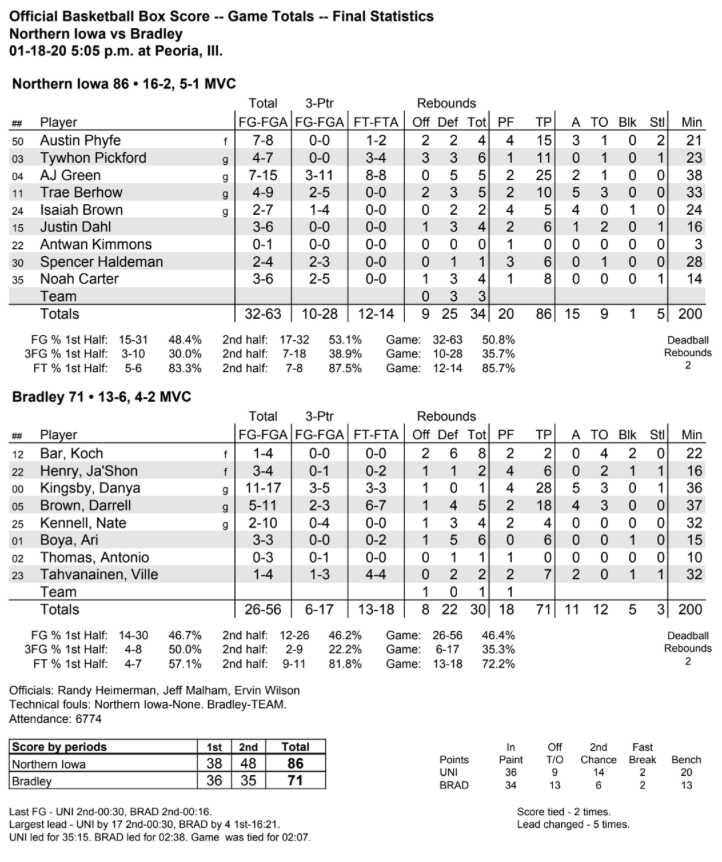