CEDAR FALLS – The UNI men’s basketball team hosted the Valparaiso Crusaders on Wednesday night at the McLeod Center, the Panthers defeated the Crusaders 88-78 to move to 15-2 on the season and 4-1 in the MVC.

The Panthers outrebounded the Crusaders 20-11(5 offensive and 15 defensive) in the first half. While the Panthers struggled taking care of the ball, committing 10 turnovers to the Crusaders 2, UNI found themselves down 42-36 going into halftime.

Isaiah Brown led UNI in scoring with 9 points while AJ Green and Austin Phyfe both finished the first half with 7. The Panthers shot 53 percent (17-32) from the field and 40 percent (6-15) from behind the arc.

The Panthers jumped out to a quick 17-0 run that gave UNI a 53-42 lead with 16:00 to go in the second period. AJ Green contributed in a big way in the second half, scoring 29 points while going 9-16 from the field, 5-10 from behind the arc, and 6-6 from the free-throw line. Green remains perfect at the free-throw line in Valley play, going 24-24 from the charity stripe. Isaiah Brown provided 16 points, 3 rebounds, 6 assists, 2 steals, and 1 block on the night.

The Panthers went 30-52 from the field and made 12 of the teams 22 three-point attempts on Wednesday night. The Panthers managed to win the turnover battle, recording 19 turnovers compared to Valpo’s 21. The Panthers longest point streak was 20 points, beginning at the start of the second half and ending with 15:59 remaining in the game.

Austin Phyfe finished with 15 points, going 5-7 from the field and 5-6 from the free-throw line, Phyfe hauled in 8 rebounds and 1 assist.

The Panthers, now 15-2, will travel to Peoria, Illinois to face off against the Braves of Bradley University on Saturday, January 18th. The contest will tip-off at 5 p.m. and can be viewed on ESPN2. 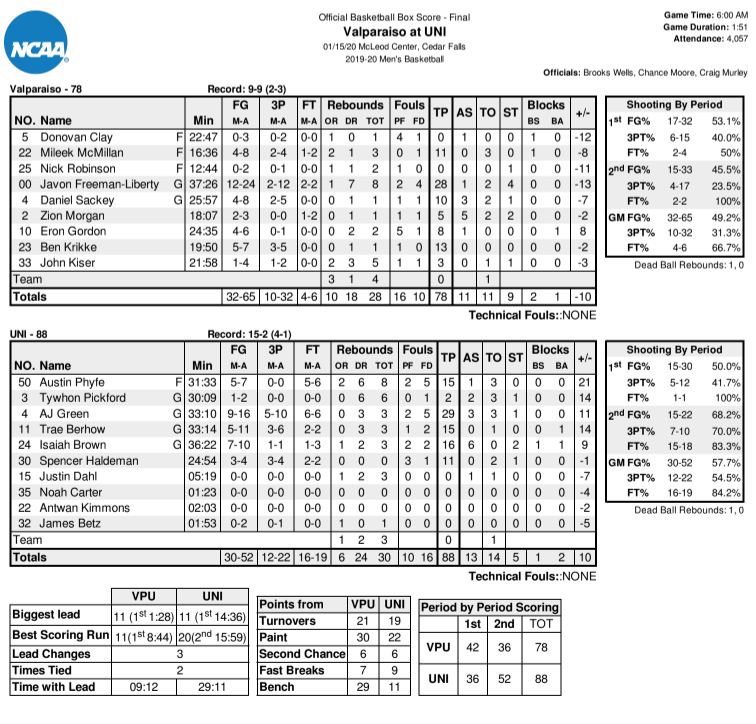