CEDAR FALLS – UNI Football is excited to announce the signing of 12 student-athletes to National Letters of Intent as part of the football National Signing Day Early Signing Period.

The group includes eight Iowans and eight offensive and defensive linemen. The Panthers also added players form Kansas, Oklahoma, Nebraska, Minnesota and Missouri. Along with the lines, UNI grabbed a linebacker, a tight end, an athlete and a late addition at running back.

Two athletes, Jaylin Richardson and Jacob Ferguson, will enroll early and will be eligible to participate in spring drills.

The Panthers return eight starters on both sides of the ball, not including Preseason All-American Briley Moore, off of a team that advanced to the FCS Quarterfinals. 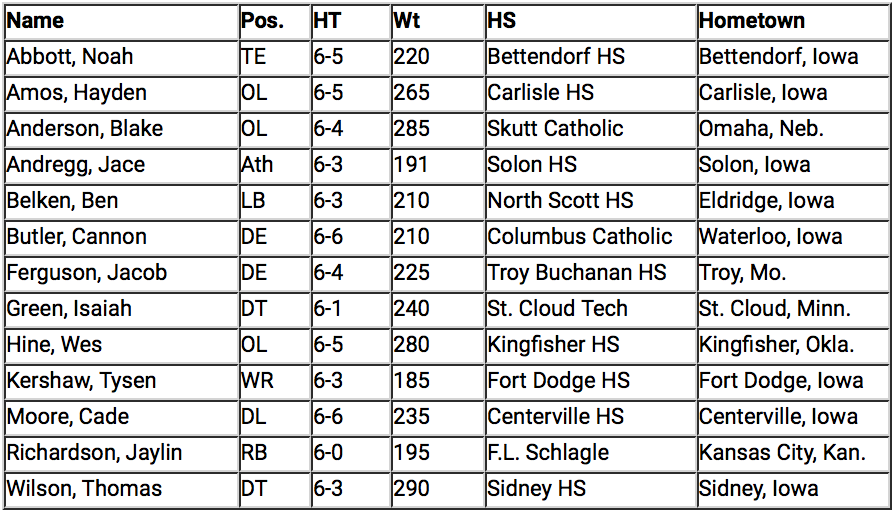 Noah Abbott • TE • 6-5 • 220 • Bettendorf HS/Bettendorf, Iowa
Abbott was a second-team All-State honoree in 2019 for back-to-back state semifinalist Bettendorf… He tallied 380 yards and four Touchdowns on 26 receptions during his senior year… Earned First-team All-District and Second-Team All-State honors his senior year… Was First-Team All-Metro in 2019 and Second Team All-Metro in 2019… Was a team captain for the 2019 season… He also plays baseball, hockey and runs track.

Hayden Amos • OL • 6-5 • 265 • Carlisle HS/Carlisle, Iowa
Amos is a two-year All-District honoree and was named Second-Team All-State… He helped lead Carlisle to playoff appearances in 2017 and 2019… Is a three-sport athlete competing in football, basketball and track and field… He is a captain for his football and his basketball team… He is in the top-10 in his school all-time record book for discus… Helped lead his track and field team to three conference championships… Four Year honor roll student… Three Sport All-Academic Team Honoree.

Blake Anderson • OL • 6-4 • 285 • Skutt Catholic/Omaha, Neb.
Anderson is a two-time First-Team Super State honoree and two-time Class B All-State Honorer… Helped lead his team to back-to-back state championships in 2018 and 2019… Was a state runner-up in 2017… Was a three-Year All-Conference Player… was ranked the No. 1 player in Class B by Huskerland Preps… Named a team captain for the 2019 season… Tallied 124 career tackles and seven sacks… Also competed in track and field.

Jace Andregg • Ath • 6-3 • 191 • Solon HS/Solon, Iowa
Andregg was a member of the 2019 3A State Runner-up Solon High School team… He was named First-Team All-District, First-Team All-conference and All First-Team All-State at Defensive End… He had 39.5 total tackles, five tackles for loss and four sacks… On offense, he tallied 688 yards and nine touchdowns on 58 receptions… also tallied 51 carries for 250 yards and nine touchdowns… He was rated three-stars by 247Sports… He also competes in track and field where he is a sprinter and long jumper.

Ben Belken • LB • 6-3 • 210 • North Scott HS/Eldridge, Iowa
Belken helped lead North Scott to back-to-back State Quarterfinals… Was Two-Time All-District and two-time All-Metro… Was named Second-Team All-State in 2019… Earned Academic Awards in both 2018 and 2019… Had 33 tackles, seven TFLs, three sacks on defense his senior year… Tallied 10 receptions for 134 yards and a touchdown on offense… In 2018, he had 44.5 tackles, nine TFLs, Four Sacks and an interception… is a two-year letterwinner in basketball and a four-year letterwinner in track… He was a football team captain in 2019.

Cannon Butler • DE • 6-6 • 210 • Columbus Catholic/Waterloo, Iowa
Butler is the reigning 2019 Defensive District MVP… He earned Second-Team All-State Honors in 2019… Was a two-year All-District Honoree… Helped lead Columbus to an 8-2 record and a state playoff appearance in 2019… He had 61.5 total tackles during his senior season, including 19 tackles for loss and nine sacks… He is a three-sport athlete competing in football, basketball and track and field.

Ferguson, Jacob Ferguson • DE • 6-4 • 225 • Troy Buchanan HS/Troy, Mo.
Ferguson was a two-time All-Conference honoree and earned All-district honors in 2018 and 2019… He racked up 46 tackles, six sacks, 19 TFLs, two forced fumbles, two fumble recoveries and a touchdown… He is a three-sport athlete with letters in football, wrestling and track and field.

Isaiah Green • DT • 6-1 • 240 • St. Cloud Tech/St. Cloud, Minn.
Green comes to UNI from St. Cloud Tech. He helped the Tigers to a 5-4 record in 2019… During his senior season, he had 59 total tackles, including a team-high eight tackles for loss, 2.5 sacks, he also forced three fumbles, had a fumble recovery, a safety and a blocked kick… He had 47 tackles, 10 tackles for loss, five sacks and a fumble recovery his junior year… On the offensive end of the ball, he caught a pair of touchdowns his junior year and a pair of two-point conversions his senior year from the tight end position… He was named the No. 17 recruit in Minnesota by 247Sports.com… Also competed in track and field for the Tigers.

Cade Moore • DL • 6-6 • 235 • Centerville HS/Centerville, Iowa
Moore is a two-time All-District honoree with honors on both the offensive and defensive side of the ball…. Helped lead his team to the 2017 State 2A State Playoffs… He has been selected for both the Iowa Shrine Bowl and the River Battle Bowl… He was a team captain in 2019… He is a two-time state qualifier in the discus… He was the SCC discus champion in 2018… He is a three-sport athlete competing in football basketball and track and field… He is a four-year honor roll student and a member of the National Honor Society.

Jaylin Richardson • RB • 6-0 • 195 • F.L. Schlagle/Kansas City, Kan.
Richardson has rushed for over 5,000 career yards during his time at F.L. Schlagle High School in Kansas City… He was the Conference Player of the Year in 2019 and named First-Team All-State… Is rated three stars by ESPN and 247Sports. He was the No. 16 recruit in Kansas according to ESPN.com… He was a team captain for football… He is a dual-sport athlete also competing in basketball… He holds the school record for hitting eight three-pointers in a half.

Thomas Wilson • DT • 6-3 • 290 • Sidney HS/Sidney, Iowa
Wilson is the District 7 Lineman of the year and is a three-year All-State honoree for the small school Sidney HS… He was the KMALand Class 8-Man Lineman of the Year for both 2018 and 2019… He racked up 147 career tackles, 39.5 Career Tackles for Loss and 12 Career Sacks… He was twice named Academic All-Conference and is a four-year honor roll student… He was chosen to play in the 2020 Shrine Bowl… He is a three-sport athlete competing in football, wrestling and track and field.