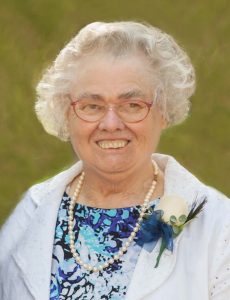 A funeral service will be held on Wednesday, October 9, 2019 at 10:30 a.m. at Hauser Weishaar Funeral Home in Charles City with Pastor Patty Kellogg officiating. Burial will be at Sunnyside Memory Gardens in rural Charles City.

Visitation will be held on Tuesday, October 8, 2019 from 5:00 to 7:00 p.m. at Hauser Weishaar Funeral Home and will continue one hour before the service on Wednesday at the funeral home.

Mary was born on June 16, 1932 in Charles City, Iowa to James and Lettie (Hermen) Tynan. Mary grew up in Charles City and graduated from Charles City High School in 1952. Against her mother’s wishes, she eloped with Jack and got married in Cedar Rapids, Iowa on August 21, 1953. Her mother told her, “Don’t you run off and marry that Jack Sprague! You’ll end up with a dozen kids.” Well, her mother was partially right. Together they had seven children: Rose, Jerry, Kathy, Jay, Jeff, Theresa, and Cindy.

Mary was a devoted wife and mother. She had several hobbies including gardening, quilting, and needlepoint. She went three days a week to the YMCA. Mary had a love for music and if the feeling overcame her, she would start dancing no matter where she was. Those of you that knew her can probably picture her dancing right now! She was known for her free spirit, happy personality, and treating people with kindness. There was a joy that her presence brought among us and she will deeply be missed.