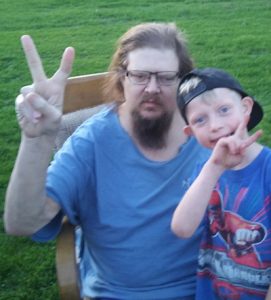 A gathering of family and friends for Steve Bartholmey will be held at Hauser Funeral Home in Charles City from 9:30 a.m. to 11:00 a.m. on Friday, August 9, 2019.  Inurnment will immediately follow at Sunnyside Memory Gardens in rural Charles City, Iowa.

Steve was united in marriage to Angela Martin on February 22, 1992 and this union was blessed with a daughter, Denise.  A few years later, through adoption, they added three more children to their loving family:  Theresa, Keith and Nathan.  The couple later divorced.

Steve was active in the Boy Scouts when he was young and played football for a short time in high school.  He enjoyed fishing, playing pool, playing foosball, working on/tinkering with cars and making up stories (according to his family, Steve was quite the story teller).  Steve loved spending time with his family, especially his grandkids, whether it was just horsing around or watching movies.

Steve was preceded in death by his father, Dale Bartholmey on September 8, 2018 and nephew, Cody Martin.

Hauser Funeral Home, (641) 228-2323, in Charles City, is in charge of local arrangements.  Online condolences may be left for the family atwww.hauserfh.com.