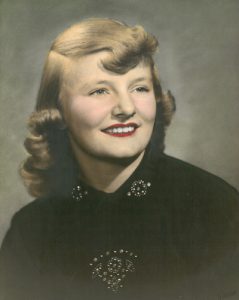 A memorial service for Sandy Meyers will be held at 4:00 p.m. on Wednesday, June 5, 2019 at Hauser Funeral Home in Charles City with Pastor Russ Leeper of Saint John Evangelical Lutheran Church officiating. Inurnment will be at Oakwood Cemetery in Floyd at a later date.

A gathering of family and friends will be held from 3:00 p.m. until the start of the memorial service at the funeral home on Wednesday.

Sandra Jane Meyers (Granneman) was born on February 24, 1937 in Sumner, Iowa. She was the daughter of Charles (Mick) Murphy, Ruth Murphy, and sister to Wayne Granneman.

Sandy attended Charles City High School. During her high school years, she worked at the theater and Salsbury Industries in Charles City, Iowa.

Sandy worked at KGLO/KIMT as the receptionist. She was well liked and the cheerful voice that greeted everyone each and every day.

Sandy later married Lloyd Le Roy (Lee) Meyers in 1967 in Mason City, Iowa. Jeffery Charles Meyers was born in 1969. Sandy and Lee moved out to an acreage north of Mason City around 1972. Sandy continued to work at KGLO/KIMT for a few more years and every Christmas her children would appear on the Bart’s Clubhouse show.

Sandy had a love for animals and there was always a pet dog in the family. The acreage included a boarding kennel, which was Meyers Boarding Kennel. In addition to running the kennel business, Sandy inquired more dogs, cats and assorted farm animals. Her passion of caring for animals lead Sandy and Lee to acquire the contract for the Mason City and Cerro Gordo County Animal Control Shelter.

Sandy and Lee continued in the business until their property was sold and they both retired to Clear Lake. During her retirement, Sandy’s new passion was visiting the nearby casinos where she was the “lady of luck”. Following Lee’s passing in 2001, Sandy reconnected with her first husband, Robert Picken.