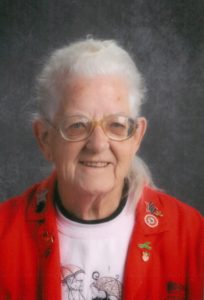 A funeral service for Elsie Martin will be held at 10:00 a.m. on Tuesday, June 4, 2019 at Hauser Funeral Home in Charles City with Pastor Matt Howlett of First Baptist Church officiating. Burial will be at Sunnyside Memory Gardens in rural Charles City.

Visitation will be held one hour prior to the service at the funeral home on Tuesday.

Elsie Cloris Carlane Allen, the daughter of James and Pearl (Rider) Allen, was born on July 6, 1924 in Spring Valley, Minnesota. She was employed with Floyd County Hospital until her retirement. After retirement, she was employed at NIACC in Charles City and worked for the Foster Grandparent Program.