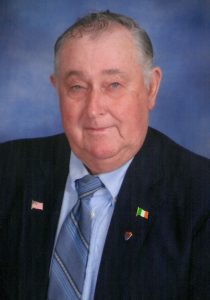 A Mass of Christian Burial for Bud Dunn will be held at 10:30 a.m. on Monday, April 29, 2019 at Immaculate Conception Catholic Church in Charles City with Reverend Gary Mayer officiating. Burial will be at 2:00 p.m. at Calvary Cemetery in Elma, Iowa.

Visitation will be at Hauser Funeral Home from 3:00 to 6:00 p.m. Sunday, April 28, 2019 with a Scripture Service beginning at 6:00 p.m. Visitation will continue one hour before the Mass on Monday at the church.

Bernard Leo Dunn, the son of Ben and Agnes (Mahoney) Dunn, was born February 9, 1936 on his childhood farm in Chickasaw County, Iowa. He attended country school through eighth grade.

On April 30, 1960, he was united in marriage to Helen Hemann at Sacred Heart Catholic Church in Meyer, Iowa. The couple was blessed with six children and farmed together until Helen passed away on March 10, 1997. Bernard loved farming and passed his love of farming down to his children.

On October 16, 1999, Bud married Bertha Holland at Immaculate Conception Catholic Church in Charles City. They enjoyed traveling together to Ireland, Alaska and many other locations in the states. They later divorced.

Bud was a member of Immaculate Conception Catholic Church, Knights of Columbus, Catholic Order of Foresters and was the director of the Deerfield Township in 1972.

Bud appreciated old tractors, joined many tractor rides, as well as drove his Farmall H through the 4th of July parade. He had an appreciation for Polka music, especially the Molly B Polka Show, and loved to dance. Another pastime he enjoyed was going to the casino with friends to gamble and eat at the buffet. Bud loved his country, voiced his political opinion to anyone who would listen and also watched MSNBC much of the day. Most of all, he loved his family and loved when they came to visit. Bud gave rides on his four wheeler and got everyone involved in a baseball game.