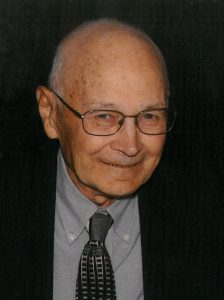 Paul J. Ritter, 93, of Charles City, passed away Wednesday, February 27, 2019, at the Mitchell County Regional Health Center in Osage with his family by his side.

A Mass of Christian Burial for Paul J. Ritter will be at 10:30 a.m. Saturday, March 2, 2019 at Immaculate Conception Catholic Church in Charles City with Reverend Gary Mayer officiating. Burial will be at Calvary Cemetery in Charles City.

Visitation will be at Hauser Funeral Home from 5:00 to 7:00 p.m. Friday, March 1, 2019 with a Scripture Service beginning at 7:00 p.m. Visitation will continue one hour before the funeral Mass at the church on Saturday.

Paul Joseph Ritter, the son of Leo and Marcella (Conley) Ritter, was born December 26, 1925 on the family farm in Chickasaw County, Iowa. He graduated from Nashua High School in 1944 and continued helping on the family farm. Paul was united in marriage to Jacqueline “Jackie” Cimmiyotti on April 30, 1951. He was drafted into the U.S. Army on May 16, 1951, and was stationed at Fort Richardson in Anchorage, Alaska. Paul and Jackie lived in Alaska until his honorable discharge on May 5, 1953, and they returned to Iowa so Paul could again help on the family farm. His passion was farming all of his life.

Paul enjoyed playing cards (especially solitaire on his iPad), playing dominoes and working word search puzzles but especially loved spending time with his family. Two highlights in Paul’s life were taking part in the Honor Flight to Washington D.C. and going on an Alaskan Cruise with some of his family (the first time he was able to return to Alaska since proudly serving his country).

Paul was preceded in death by his parents; two sisters: Donna Stoffel and Joann Sweet; and three brothers: Donald, Richard and Wallace Ritter.