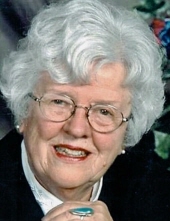 Donna L. DePrenger, 92, of Mason City, died on Sunday, December 23, 2018 at the Heritage Care and Rehabilitation Center in Mason City.

Funeral services will be held at 3 PM Friday, December 28, 2018 at the First Presbyterian Church, 100 South Pierce, with the Rev. Paul Collier officiating. Inurnment will be held at a later date in the Rock Grove Cemetery. Visitation will be held from 1 until 3 PM Friday at the church.

Donna was born on June 12, 1926 in Chicago, Illinois to Joyce and Edith (Kulander) Dady. She graduated from St. Paul Central High School in Minnesota, and then from NIACC, obtaining her Associate’s Degree. She was united in marriage to Donald DePrenger on August 23, 1945 in Colorado Springs, Colorado. Don and Donna had two children, Dan and Diane (Annie).

Donna began her career as a receptionist at a doctor’s office in Vinton, Iowa. Her family then moved to Mason City in 1965, where she worked as a Registered LPN. She also worked at NIACC, where she was a piano teacher. Donna was a valued and dependable volunteer for a number of Mason City groups and clubs. Some of her activities included the Mason City Foundation Board and Music Man Square Executive Committee, Meredith Willson Boyhood Home and Community Kitchen Board. Donna was a Past Worthy Matron of the Eastern Star, a handbell and choir director and an active member of First Presbyterian Church, P.E.O., Questers, and 20th Century Club. Donna leaves a legacy of kindness, friendship, and sense of community.

Donna is survived by her son, Dan; grandchildren, Morgan DePrenger, Dylan DePrenger, Mackenzie DePrenger, Kelly Arickx, Brandy Branstad, and Stacy Hoard; 14 great grandchildren; a sister, Ardyth Johnson and many nieces and nephews. Donna was preceded in death by her loving husband, Don; daughter and son-in-law, Annie and Mike Smith; her parents, a sister, Betty Forsyth and her brothers, Donald and Vernon Brunkow.

Memorials may be directed to the family of Donna DePrenger, First Presbyterian Church, or Hospice of North Iowa.