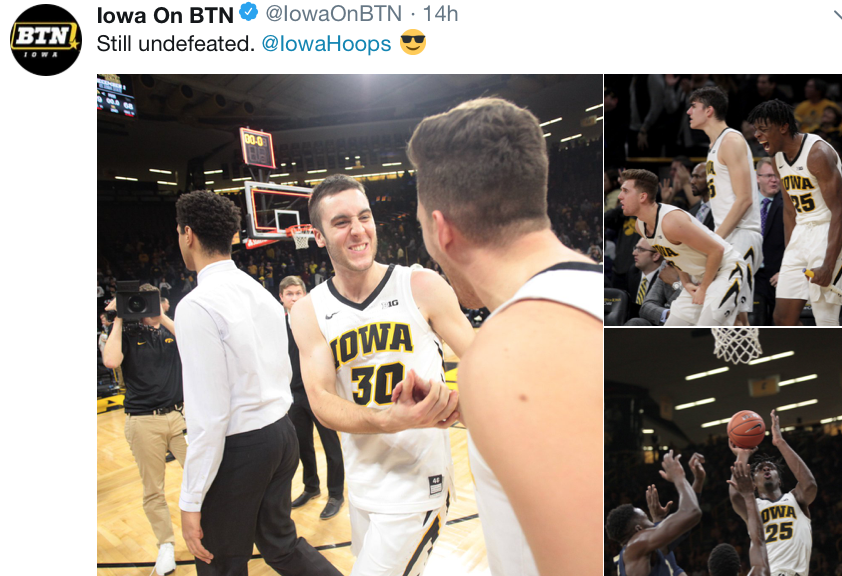 Nicholas Baer scored 14 of his 16 points in the second half, including a stretch of 11 straight, registering a season high.

“What’s fun about this team is that we have so many weapons,” Baer said after the game. If you take away one thing, we’re able to combat it with something else. I had confidence in my shot. After hitting my first one, I kept looking for my shot the rest of the night.”

Iowa trailed 46-40 at the half, but applied real defensive pressure in the second have to squeak out the victory.

“We’re much more connected defensively,” star forward Tyler Cook said after the game. “We only gave up 22 points in the second half.”

Joe Wieskamp recorded his first double-double of his career with 18 points and 11 rebounds.

“We knew they were going to double our posts,” Bohannon said. “Our posts started kicking the ball out, and we hit our shots.”

And it's another thriller in the #B1GACC Challenge as @IowaHoops holds on against Pitt!

Next up for the Hawkeyes is the Wisconsin Badgers this Friday in Carver! Its the Gold Game so wear your Hawkeye Gold #fightforiowa pic.twitter.com/hUbZpG8Zx9