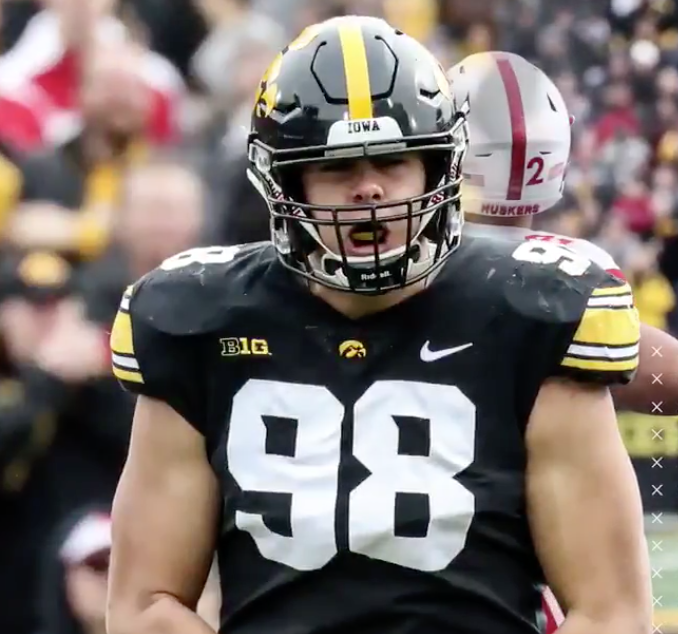 IOWA CITY – University of Iowa junior defensive end Anthony Nelson has been named Big Ten Conference Co-Defensive Player of the Week following Iowa’s 31-28 win over Nebraska in the Hy-Vee Heroes Game. The announcement was made Monday by the Big Ten office.

The honor marks the second time this season Nelson has been recognized by the Big Ten, and his third career weekly honor. He was named Freshman of the Week for his play in a 2016 win over Miami, Ohio.

Nelson (6-foot-7, 271 pounds), recorded a career-high eight tackles against Nebraska, including three solo stops and five assists. Nelson recorded a game-best two sacks and had one pass break-up and one QB pressure. The Hawkeyes recorded five tackles for loss and three sacks in winning the Heroes Trophy for the fourth straight year.

Nelson ranks second in the Big Ten with 9.5 sacks (same as teammate A.J. Epenesa), and has 11 tackles for loss among his 41 tackles in 12 games. He collected three sacks in the win at Minnesota to earn his previous honor in Iowa’s first Big Ten contest. The 9.5 sacks by Nelson and Epenesa are the most by a Hawkeye since 2011 (Mike Daniels).

Nelson and Epenesa have each been honored on two occasions this season, with Epenesa being recognized for his play in wins over Iowa State and Illinois. Nelson has also earned CoSIDA District 6 Academic All-America honors earlier this month.

Junior quarterback Nate Stanley earned the Big Ten offensive honor for his play in a win at Indiana, while freshman defensive back Riley Moss was named Freshman of the Week for his play in the win at Minnesota.

Iowa completed the season with an 8-4 overall record, including a 5-4 record in Big Ten play to share second place in the West Division. The Hawkeyes will learn their bowl destination and opponent on Sunday, Dec. 2.