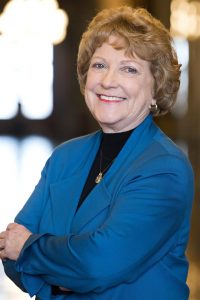 DES MOINES – State Senator Amanda Ragan of Mason City will continue to help lead the Iowa Legislature over the next two years.

Senator Ragan was re-elected Whip by the other Democratic members of the Iowa Senate during a Statehouse meeting November 11. As Whip, she assists the Democratic Leader in assessing caucus members’ positions on bills and amendments.

“I’m grateful for the support of my fellow legislators, and I look forward to the work ahead,” said Ragan. “I will continue standing up for my North Iowa constituents and for all Iowans to ensure everyone gets the tools they need to succeed—affordable health care, strong schools and opportunities to get ahead.”

Ragan is serving her fifth term in the Iowa Senate. She represents Franklin, Butler and Cerro Gordo counties.

Outside of the Legislature, she works as executive director for two non-profit agencies, The Community Kitchen of North Iowa and Mason City Meals on Wheels.
Amanda is married to Jim Ragan, a retired U.S. Air Force Lt. Colonel. She has two grown children, Edith and Charles, and four grandchildren.

The first legislative session of the 88th Iowa General Assembly will convene on Monday, January 14, 2019. For more information, contact State Senator Amanda Ragan at 641-424-0874 or at amanda.ragan@legis.iowa.gov.