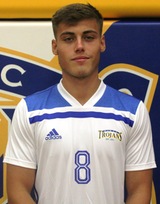 Saunders led the Trojans with seven goals and nine assists in the 2018 season. Saunders collected seven goals with 13 assists in his two-year career at NIACC and the 13 assists ranks fifth on the school’s career assist list.

NIACC was 6-9-1 overall in 2018 and 4-5-1 in the ICCAC. The Trojans dropped a 2-1 decision to Indian Hills in the opening round of the NJCAA Region XI tournament.