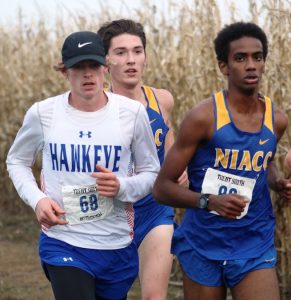 MASON CITY – For the second time this season, NIACC’s Abdiaziz Wako claimed an individual title at a cross country meet.

Wako, a sophomore, claimed the second annual Trent Smith Invitational in a personal best time of 26 minutes, 41 seconds on the 8-kilometer course on the NIACC campus on Friday. Wako won the Grand View Invitational in 27:41 on Sept. 14.

NIACC placed second with 56 points. Hawkeye CC was the team champion with 28 points and Southwestern CC was third with 77 points.

NIACC returns to action Oct. 26 at the NJCAA Region XI meet in Davenport. 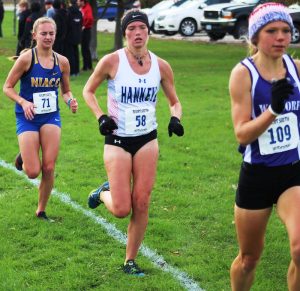 The No. 17 (NJCAA Division II) Lady Trojans compiled 58 points to earn their second-place finish at the second annual invite that honors the former NIACC all-American who died in a car accident in August of 2016.

Hawkeye CC was the women’s team champion with 44 points and Buena Vista University was third with 84 points.

Freshman Emma Davison led the Lady Trojans with a fourth-place finish in a career-best time of 19 minutes, 32 seconds on the 5-kilomter course on the NIACC campus. Waldorf University’s Marissa Kuik was the individual champion in a meet record time of 18:44.

NIACC returns to action Oct. 26 in the NJCAA Region XI meet in Davenport.