MASON CITY – A man was arrested after a stabbing incident at a Mason City residence Monday afternoon.

On Monday, May 28, 2018, at approximately 4:41 PM, Mason City Police Officers responded to a report of a possible stabbing victim at 1111 East State Street. Upon arrival, officers were unable to make contact with anyone in the residence. A short time later, officers made entry into thr residence. At that time, Godfrey Wade Dawson, Jr., age 30, was located inside the residence. Dawson had injuries that were not life threatening. He was transported to the hospital for treatment.

The investigation determined that Dawson had come to the residence in violation of an existing no contact order. While he was there, he was involved in an altercation with the resident. During the altercation, the victim used a knife in self-defense to protect herself from Dawson. The victim sustained minor injuries. The victim was the protected party identified in the no contact order.

Dawson was arrested on three outstanding warrants – two for probation revocation and one for absence from custody. In addition, Dawson was charged with new violation of a no contact order. Dawson was transported to the Cerro Gordo County Jail. 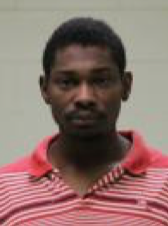