RURAL HAMILTON COUNTY, IOWA – An Iowa trucker failed to yield to an on-comong train and paid the price after a collision this week in rural Hamilton county.

On March 29 at 9:30 AM, the Hamilton County Sheriff’s Office helped the Iowa State Patrol investigate a train semi accident on McMurray Avenue, a quarter mile north of 220th Street.

A 2001 International truck tractor operated by Robert Mitchell of Webster City was southbound on McMurray Ave. and he collided with a Canadian National Railway train that was westbound.

Mitchell was transported to Van Diest Medical Center with minor injuries. The truck tractor and trailer were totaled. The train had only minor damage.

Mitchell was cited for failure to yield at a railroad crossing. 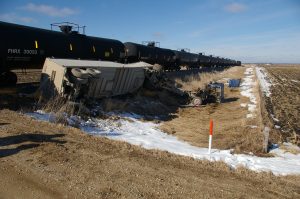 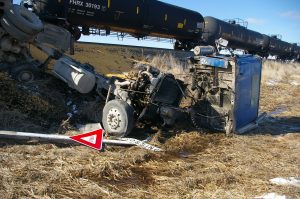