MASON CITY – An immigration hold has been placed on a man thought to be suspicious and arrested by police early Monday morning.

Mason City police officers responded to a report of a suspicious person on Monday morning, March 5 at about 4:46 AM at 914 North Madison Avenue. After an investigation, they located 27-year-old Josue Castaneda Sanchez, who lives on the city south side. He was arrested for public intoxication and possession of an altered driver’s license.

Sanchez was taken to the county jail, where he remains on an immigration hold, likely an ICE detainer. 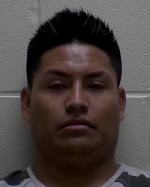