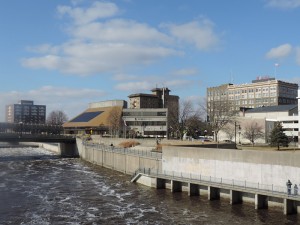 WATERLOO – Police in Waterloo chased a vehicle stolen in a nearby county and six people were arrested on a range of charges.

During the early morning hours of Wednesday, February 14, 2018 Officers located a vehicle that had been reported stolen out of Benton County Iowa. When officers attempted to stop the vehicle it led officers on a short pursuit, which ended when the suspect vehicle lost control and slid into a snow bank in the area of Papermill and LaPorte Road, Waterloo. Three suspects fled the vehicle and were apprehended a short distance from the vehicle.

Further investigation showed that these subjects were involved in a Burglary at the Karma Bar, 309 W. 4th Street, Waterloo prior to the pursuit.

While investigating the local burglary, evidence was found in their possession from other burglaries in Black Hawk and Benton County’s. Several search warrants were served and officers recovered numerous pieces of evidence including stolen firearms.

While this investigation was ongoing Waterloo Police Officers responded to a shots fired call in the area of 4th and Wellington. Officers were able to locate and stop the suspect vehicle and the investigations into this matter resulted in an additional firearm being recovered.

As a result of these two investigations, the Waterloo Police Department in cooperation with the Black Hawk and Benton County Sheriff’s Offices recovered 7 stolen firearms.

The following suspects were arrested and charged in Black Hawk County District Court:

Devanta D. Riley, age 23 was arrested as the result of the unrelated shots fired call, charged with Carrying Weapons, Intimidation with a Dangerous Weapon, and going Armed with Intent.

This investigation has resulted in the 300th firearm being recovered by the Waterloo Police Violent Crime Apprehension Team. With multiple agencies involved in this ongoing investigation, no further information will be released at this time.

4 Responses to Stolen car out of Benton county chased in Waterloo, 6 people arrested