NEW YORK, NEW YORK – Ahmad Khan Rahimi, aka, Ahmad Rahami, 30, of Elizabeth, New Jersey, was sentenced to life in prison for his execution and attempted execution of bombings in New York City on Sept. 17, 2016.

“Today our legal system delivered on its promise to provide swift and resolute justice to those who would target innocent victims by perpetrating terrorist attacks against our homeland,” said Acting Assistant Attorney General O’Callaghan. “I commend all of the agents, analysts and prosecutors whose commitment and dedication made this result possible.”

“Inspired by ISIS and al Qaeda, Ahmad Khan Rahimi planted and detonated bombs on the streets of Chelsea, and in New Jersey, intending to kill and maim as many innocent people as possible,” said U.S. Attorney Berman. “Less than a year-and-a-half after his attacks, Rahimi has now been tried, convicted, and sentenced to life in prison. Rahimi’s conviction and sentencing are victories for New York City and our nation in the fight against terror.”

“Today’s sentencing assures us that Ahmad Khan Rahimi will spend the rest of his life behind bars. Once again, the lesson learned is clear: if you plot to cause catastrophic damage against this city and our citizens, you will be held accountable,” said Assistant Director Sweeney. “I would like to thank the FBI Joint Terrorism Task Forces here in New York and New Jersey, along with many other law enforcement partners, who moved with speed in this investigation and who work every day to protect Americans from acts of terror. I would also like to express my gratitude to the public who remained engaged throughout this investigation. That partnership and the public’s continued cooperation are crucial to ensuring we stay ahead of threats, and enhance law enforcement’s response following attacks like this.”

“Rahimi attempted to wreak havoc in the Chelsea neighborhood of New York City. He failed,” said Commissioner O’Neill. “Committing terrorism may seem, from the darkest places of the internet and espoused in propaganda, as a higher calling. It is not. Today’s sentencing — of life in prison — should be the strongest deterrent to future acts of terror. My thanks to the police officers from the 13th precinct, NYPD detectives, investigators on the Joint Terrorism Task Force, and prosecutors here in Manhattan for making today’s sentencing possible.”

According to the Complaint, the Indictment, other filings in Manhattan federal court, evidence at trial, and statements made in court proceedings:

At approximately 8:30 p.m., the 23rd Street Bomb – containing a high explosive main charge and thousands of ball bearings – detonated, causing injuries to over 30 people and hundreds of thousands of dollars in property damage across a 650-foot crime scene. The injuries included, among other things, lacerations to the face, abdomen, legs, and arms caused by flying glass; metal shrapnel and fragmentation embedded in skin and bone; and various head injuries. The explosive components appear to have been placed inside a pressure cooker and left near a dumpster. The explosion propelled a more-than-100-pound dumpster – which was introduced as an exhibit at trial – more than 120 feet. The blast shattered windows as far as approximately 400 feet from the blast site and, vertically, more than three stories high.

Shortly after the 23rd Street Bomb detonated, a civilian identified the 27th Street Bomb and promptly called 911, which recorded call was introduced in evidence and played at trial. The 27th Street Bomb, which was rendered safe prior to detonation, consisted of, among other things, a pressure cooker connected with wires to a cellular telephone (likely to function as a timer) and packaged with an explosive main charge, ball bearings, and steel nuts.

Earlier that day, at approximately 9:35 a.m. on Sept. 17, 2016, another improvised explosive device, which had been planted by Rahimi in the early morning hours, detonated in the vicinity of Seaside Park, New Jersey, along the route for the Seaside Semper Five Marine Corps Charity 5K race. The start of the race – which was scheduled to begin at 9:00 a.m. – was delayed. Had the race started on time, the bomb would have detonated as runners were passing by where Rahimi had planted it.

On Sept. 18, 2016, at approximately 8:40 p.m., six additional improvised explosive devices that Rahimi also planted were found inside a backpack located at the entrance to the New Jersey Transit station in Elizabeth, New Jersey. One of these devices detonated as law enforcement used a robot to defuse it.

On September 19, 2016, at approximately 9:30 a.m., Rahimi was arrested by police in Linden, New Jersey. Rahimi fired multiple shots at police, striking and injuring multiple police officers before he was himself shot, subdued, and placed under arrest. In the course of Rahimi’s arrest, a handwritten journal was recovered from Rahimi’s person. Written in the journal were, among other things, mentions of explosive devices (including “The sounds of bombs will be heard in the streets” and “Bombs set off in the streets they plan to run a mile”), and laudatory references to Usama Bin Laden, the former leader of al Qaeda, Anwar al-Awlaki, a former senior leader of al Qaeda in the Arabian Peninsula, Mohammed al-Adnani, a former senior leader of the Islamic State in Iraq and al Sham, and Nidal Hasan, who shot and killed 13 people in Foot Hood, Texas.

In addition to the prison term, Rahimi was sentenced to five years of supervised release and ordered to pay $562,803 in restitution.

In addition to the charges for which he was sentenced in Manhattan federal court, Rahimi also has been charged in a Complaint in the District of New Jersey with offenses in connection with his alleged efforts to detonate explosives in Seaside Park, New Jersey, and Elizabeth, New Jersey. 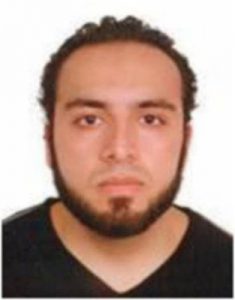