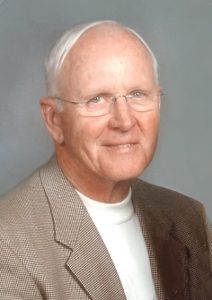 A funeral Mass for Mel Elliott will be held 10:30 a.m. Friday, February 16, 2018 at Immaculate Conception Catholic Church in Charles City. Burial will be at Calvary Cemetery in Charles City.

Visitation will be at Hauser Funeral Home in Charles City from 5:00 to 7:00 p.m. Thursday, February 15, 2018 with a Scripture Service beginning at 7:00 p.m. Visitation will continue one hour prior to the funeral Mass at the church on Friday.

Mel, as he was known to his friends, was born on October 2, 1935 to Laurence “Bud” and Blanche Elliott in Colwell, Iowa. He graduated from Colwell High School in 1953 and then attended Loras College in Dubuque, Iowa until he joined the United States Navy. He served his country from 1954 to 1956. Mel married Darlene Meitner in 1960 and started a large farming operation. In 1968 he started a new career selling State Farm Insurance and moved to Storm Lake, Iowa. Mel was a hard worker and was very successful in the insurance business. He was awarded with many trips and was named a Lifetime member of the Millionaire Club. He continued selling insurance in Storm Lake until his retirement in 1997 after 29 years with the company.

Retirement soon found him spending winters in Arizona. Mel was an avid golfer with three hole-in-ones in his last year and nine throughout his lifetime. Eventually he moved to Mesa, Arizona year round. He enjoyed hunting with family, playing cards and the Iowa Hawkeyes. He was a great family man, always concerned with others’ well-being. Mel was devoted to Darlene, his wife of 59 years, who developed Alzheimer’s in recent years and he was her support and chief caregiver for the last year. Mel was a very competitive and endearing person, always telling jokes and having a good time with friends. He loved to golf and won many tournaments in his lifetime.

Mel is survived by his wife Darlene; son, Steve Elliott (Lori); son, Jerome Elliott (Liete); and grandchildren: Kyle, Thomas, Sarah and Ryan Elliott. He is also survived by his brother, Gary Elliott (Mary); sister, Laurna Schlader; and sister-in-law, Arlie Wilson; along with many nieces and nephews.