Cyclones will get quarterback Kempt for one more season 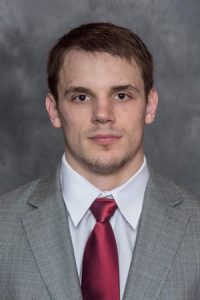 AMES – The Iowa State Athletics Department announced today that quarterback Kyle Kempt has been granted a sixth season of eligibility by the NCAA. Kempt will be a senior at Iowa State in 2018.

The NCAA granted Kempt an extension of eligibility on Jan. 30 after considering the totality of circumstances surrounding his transfer from Oregon State University and Hutchinson Community College (Kansas).

“We are excited that Kyle was given another year of eligibility by the NCAA,” Iowa State head football coach Matt Campbell said. “We alerted Kyle and our recruits when we received the clearance notification on Jan. 30. Since then all of our efforts had been focused on our 2018 football team and recruiting. Kyle has established himself as a leader on our team and we are thrilled by the NCAA’s decision to allow him to remain a Cyclone in 2018.”

“I’m relieved the decision has been made and extremely excited to be back with the team in 2018,” Kempt said. “We have a lot of work to do and it is a thrill for me to be able to represent this great university for another year. I am also thankful for the NCAA for looking at my situation so thoroughly and for all of the people involved in this process. They put in a lot of hard work and I really appreciate it.”

A native of Massillon, Ohio, Kempt played a huge part in Iowa State’s resurgence nationally in 2017, helping the Cyclones post an 8-5 record, appear in the AP top-25 for the first time since 2005 and claim their fourth bowl win in school history.

Kempt had attempted only two passes in his collegiate career prior to earning his first career start at No. 3 Oklahoma on Oct. 7. He proceeded to lead Iowa State to one of its greatest victories in school history, throwing for 343 yards and three touchdowns on 18-of-24 passing.

Kempt’s fourth-quarter toss to Allen Lazard with 2:19 left in the game was the game-winner in the Cyclones’ 38-31 victory. Kempt was named Davey O’Brien National QB of the Week and Big 12 Offensive Player of the Week after his performance vs. the Sooners.

Kempt kept the Cyclones rolling through a perfect October (4-0), including another win over a top-5 opponent in a 14-7 victory vs. No. 4 TCU in Jack Trice Stadium.

The honorable mention All-Big 12 selection finished the season with a 5-3 record as a starter, including a 3-1 mark vs. ranked opponents. He broke ISU’s single-season completion percentage (66.3) mark, connecting on 161-of-243 passes for 1,787 yards and 15 touchdowns. His 15 touchdowns passes ties for fifth on Iowa State’s season record list in just nine games played.

Kempt began his career at Oregon State in 2013, redshirting his first season and directing the scout team in 2014. After a coaching change, Kempt transferred to Hutchinson Community College in 2015.

Kempt joined the Cyclones as a walk-on in 2016, seeing action in two games. He got his chance in 2017 where he remained a walk-on.

Campbell also announced that Kempt has received a scholarship for the remainder of his Cyclone career.