ESTHERVILLE, IOWA – A Minnesota man who harmed a 2-year-old North Iowa girl before police chased him on foot through town has been sent to prison.

On November 3, 2017, Estherville Police responded to a complaint of possible child abuse. During the investigation, it was determined that a 2-year-old female child had received injuries that were suspected to be from abuse. The child was transported to Avera Holy Family Hospital for treatment of her injuries.

Peaches was transported to the Emmet County Jail where he was initially charged with Interference with Official Acts. Upon completion of the investigation, Peaches was additionally charged with Neglect of a Dependent Child a Class “C” Felony, Child Endangerment with Bodily Injury a Class “D” Felony, Child Endangerment an Aggravated Misdemeanor, Unlawful Possession of Prescription Drugs a Serious Misdemeanor, and Unlawful Possession of Drug Paraphernalia a Simple Misdemeanor.

This month, Peaches pled guilty to Child Endangerment with Bodily Injury a Class “D” Felony, and was sentenced to 5 years in prison. He must also pay $1,499.16 in fines and court costs. He has already been sent to prison to begin serving his time. 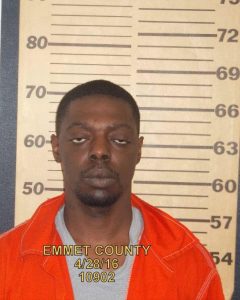