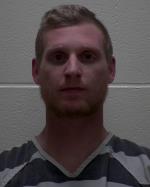 On December 25, 2017 at 12:22 AM, a Cerro Gordo County Deputy attempted to stop a green 1998 Oldsmobile Intrigue driven by 30-year-old Justin Glidden of Ventura, Iowa, at the intersection of 237th and Balsam Avenue just south of Ventura. Glidden refused to stop and attempted to elude Deputies. The pursuit continued into Hancock County on various gravel roads. The pursuit then entered Wright County also on gravel roads and some paved county roads. Speeds at some points during the pursuit reached 90mph. The pursuit then continued along the outskirts of Belmond, IA before re-entering Cerro Gordo County into Meservey, IA. The pursuit continued for a short time in Meservey then entered Franklin County on Balsam Avenue. Glidden then turned east on to County Road C13. Glidden continued for a mile and attempted to slow down for a turn at Cardinal Avenue in Franklin County. At this point a Cerro Gordo County Deputy intentionally made contact with the suspect vehicle to stop the pursuit. Glidden was taken into custody without any further incident.

Nobody was injured during the pursuit.

Glidden was charged with eluding a law enforcement vehicle, an aggrevated misdemeanor; driving barred, an aggrevated misdemeanor as well as several traffic violations which were all simple misdemeanors. Glidden was transported and booked into the Cerro Gordo County Jail. Cerro Gordo County was assisted by the Hancock, Wright and Franklin County Sheriffs Offices as well as the Belmond Police Department and Iowa State Patrol.