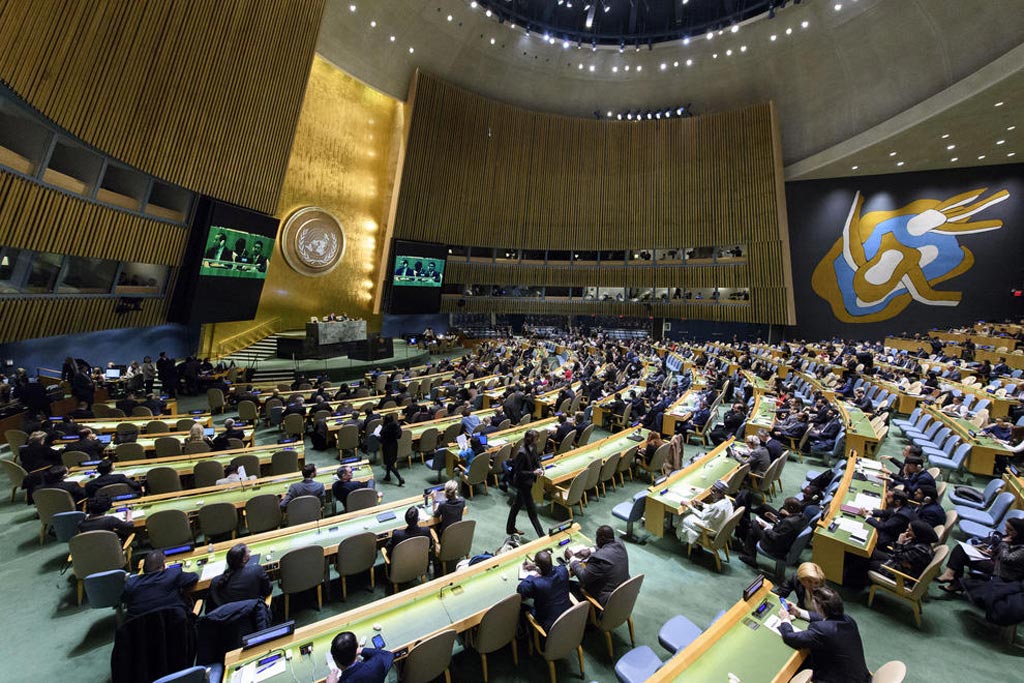 NEW YORK – By an overwhelming majority, Member States in the United Nations General Assembly on Thursday “demanded” that all countries comply with Security Council resolutions regarding the status of Jerusalem.

Through a resolution adopted by a recorded vote of 128 in favor to nine against, with 35 abstentions, the 193-member Assembly expressed “deep regret” over recent decisions concerning the status of Jerusalem and stressed that the Holy City “is a final status issue to be resolved through negotiations in line with relevant UN resolutions.”

Back on December 6, United States President Donald J. Trump following through on a campaign promise to recognize Jerusalem as the capital of the State of Israel. He instructed the State Department to begin to relocate the U.S. Embassy to Israel from Tel Aviv to Jerusalem, the White House said.

Action in the Assembly today follows a failed attempt by the Security Council on Monday adopt a similar text reflecting regret among the body’s members about “recent decisions regarding the status of Jerusalem,” with a veto from the United States, a permanent member of the Council.

A U.S. ambassador, Nikki Haley, said “The US will be taking names,” in the wake of the unfavorable vote.

That same day, Khaled Hussein Mohamed Alyemany, Permanent Representative Yemen, and Feridun H.Sinirliolu, Permanent Representative of Turkey, in their respective capacities as Chair of the Arab Group and the Chair of the Summit of the Organization of the Islamic Cooperation, requested the President of the General Assembly to “urgently resume’ the tenth emergency special session of the General Assembly in accordance with the so-named ‘Uniting for peace’ procedure.

This procedure, under Assembly resolution 377 (1950), is a pathway around a Security Council veto. By it, the Assembly can call an emergency special session to consider a matter “with a view to making appropriate recommendations to members for collective measures,” if the Security Council fails to act or if there is lack of unanimity among the Council’s permanent members, China, France, Russia, United Kingdom, and the United States.

Since the tenth such meeting, the Assembly has temporarily adjourned the emergency special session and authorized “the President of the General Assembly […] to resume its meeting upon request from Member States,” allowing for speedy consideration by the body of urgent issues.

The most recent resumed emergency session was in 2009 when the Assembly called a meeting on East Jerusalem and the Occupied Palestinian Territory.

Resolutions in the Assembly are non-binding and do not carry the force of international law as do measures agreed in the Security Council.

Today’s resolution demanded that “all States comply with Security Council resolutions regarding the Holy City of Jerusalem, and not recognize any actions or measures contrary to those resolutions.”

The General Assembly further affirmed that “any decisions and actions which purport to have altered the character, status or demographic composition of the Holy City of Jerusalem have no legal effect, are null and void and must be rescinded in compliance with relevant resolutions of the Security Council.”

In that regard the Assembly also called upon all States to refrain from the establishment of diplomatic missions in the Holy City of Jerusalem, pursuant to Security Council resolution 478 adopted in 1980.

Reiterating its call for the reversal of the negative trends that endanger the two-State solution, the Assembly urged greater international and regional efforts and support aimed at achieving, without delay, a comprehensive, just and lasting peace in the Middle East.

Referencing tomorrow's UN vote criticizing the US embassy move. In the words of the President, "Let them vote against us, we'll save a lot." pic.twitter.com/eUGWD4cCBR

At the UN we're always asked to do more & give more. So, when we make a decision, at the will of the American ppl, abt where to locate OUR embassy, we don't expect those we've helped to target us. On Thurs there'll be a vote criticizing our choice. The US will be taking names. pic.twitter.com/ZsusB8Hqt4

"What we witnessed here today in the Security Council is an insult. It won’t be forgotten. It’s one more example of the @UN doing more harm than good in addressing the Israeli-Palestinian conflict."
-Amb. Haley after vetoing a UNSC resolution on Jerusalem: https://t.co/ipDIorG7KY pic.twitter.com/rhRLzZXWFr