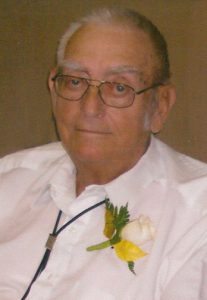 Stanley Hodina, 89, of Osage, formerly of Floyd, passed away Wednesday, November 22, 2017 at the Faith Lutheran Home in Osage.

A funeral service for Stanley Hodina will be held 10:30 a.m. Tuesday, November 28, 2017 at Grace United Methodist Church in Floyd with Pastor Wendy Johannesen officiating. Burial will be at Oakwood Cemetery in Floyd.
Visitation will be at Hauser Funeral Home in Charles City from 6:00 to 8:00 p.m. Monday, November 27, 2017 and will continue one hour before the funeral service at the church on Tuesday.

Stanley LeRoy Hodina, the son of Charles and Lucette (Shank) Hodina, was born February 24, 1928 in Marshall County, Iowa. He attended school in the Marshalltown area, but was forced to quit with the death of his father so he could run the farm and take care of his mother and two sisters. When Stanley was about 20 years old, he moved to the Floyd, Iowa area with his mother after purchasing their new family farm.

Stanley met Marlys Chesnut in March of 1956, and after a brief courtship, the two were married on September 8, 1956. The couple lived and worked on their farm near Floyd for over 33 years and he was also a dealer for Epley Corn. In 1988, they moved into the town of Floyd, but Stanley never stopped being a farmer at heart always concerned with operations at the farm. In 2015, both Stanley and Marlys moved to the Faith Lutheran Home assisted living in Osage, Iowa.

Stanley loved his family very much (even helping put his younger sister, Virginia through college) and he cherished all the time spent with them, especially his grandchildren and great-grandchildren. He was an active member of Grace United Methodist Church where he and Marlys were custodians and caretakers for several years and he served as President on the Church Board. Stanley was also a member of Farm Bureau, Pork Producers, Senior Citizens Center, Heritage Club and Floyd Lions Club. Stanley acted as Treasurer for the Township they resided in and surrounding schools sending money wherever the students attended. This positon was dissolved once districts were established in their area.

Grateful for having shared in Stanley’s life are his three children: Richard (Cecilia) Hodina of Floyd, David (Cheryl) Hodina of Rapid City, South Dakota and Nancy Kephart of Riceville; 10 grandchildren; 25 great-grandchildren; along with several nieces and nephews.