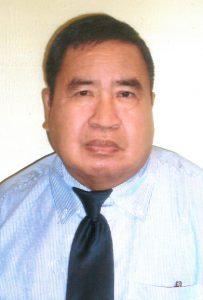 Isagani Oropesa, 69, of Charles City, passed away Wednesday, November 22, 2017 at Mercy Medical Center North Iowa in Mason City with his loving family at his side.
A funeral Mass for Isagani Oropesa will be held 10:30 a.m. Saturday, December 2, 2017 at Immaculate Conception Catholic Church in Charles City with Reverend Gary Mayer celebrating the Mass. Burial will be at Calvary Cemetery in Charles City.
Visitation will be at Hauser Funeral Home from 5:00 to 7:00 p.m. Friday, December 1, 2017 and will continue one hour prior to the funeral Mass at the church on Saturday.

Isagani O. Oropesa, the son of Jeremias Fernandez and Apolonia Oropesa, was born October 16, 1948 in Manila, Philippines. He received his education in Manila and worked several jobs in the area. Isagani was a police officer with the Philippines Port Authority for 23 years, a job he was proud to hold.

Isagani was united in marriage to Cleopatra Vallebo on October 1, 1977 at a Catholic Church in Manila. They made their home in Manila and started raising their family there before moving to San Diego, California in 1999. Isagani (along with his wife, Cleopatra and daughter, Kathleen) moved to Charles City, Iowa in 2000. He was a member of Immaculate Conception Catholic Church. Isagani enjoyed boxing, basketball and spending time with his family. He loved to cook, was always happy and had a big heart (especially for children in his life).

He was preceded in death by his mother, Apolonia Oropesa and sister, Celinia Fernandez.