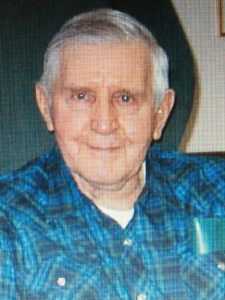 A funeral service for Gib Lacour will be held 10:30 a.m. Saturday, November 4, 2017 at Grace United Methodist Church in Floyd with Pastor Wendy Johannesen officiating. Burial will be at 1:30 p.m. at Sunnyside Memory Gardens in rural Charles City.

Visitation will be at Hauser Funeral Home in Charles City Friday, November 3, 2017 from 5:00 to 7:00 p.m. and will continue one hour before the funeral service at the church on Saturday.

Gilbert “Gib” Arthur Lacour, the son of Fred and Martha (Hirsch) Lacour, was born May 12, 1927 in rural Floyd, Iowa. He attended school at Orchard High School. On November 28, 1948, Gib was united in marriage to Phoebe Goddard at the Little Brown Church in Nashua. The couple made their home in rural Floyd, Iowa and were blessed with five children.

Gib joined the United States Army in March 1946, and proudly served his country until September 1947 when he was honorably discharged. He worked at Oliver/White Farm in Charles City for twenty-seven and a half years and farmed, did carpentry work and electrical work (he was really a jack of all trades).

Gib was a member of Grace United Methodist Church in Floyd, Farm Bureau, Wildwood Golf Course and Cedar Ridge Country Club. He and his wife were also involved with World Vision which allowed them to sponsor several children in other countries for many years. Gib enjoyed tennis, bowling, fishing, feeding the birds, hunting, gardening, ping pong (playing in family tournaments every year), pool, baseball and cheering for the Hawkeyes. Two of his passions in life were golf and his family. He was an avid golfer who was still playing this past summer. Gib loved his family very much and thrived on being the best dad and grandpa he could be.

He was preceded in death by his parents; wife, Phoebe on August 17, 2010; grandson, Daniel in 2016; three sisters: Mabel Shorey, Leona Jacobs and Gladys Lacour (in infancy); and two brothers: Milton and Clarence Lacour.