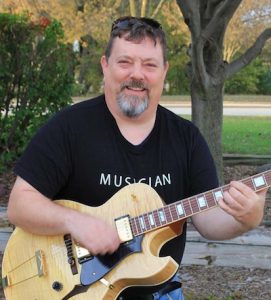 A funeral service for Mark Fleming will be held 10:30 a.m. Monday, August 28, 2017 at the Gospel Lighthouse Church in Floyd with Pastor Paul Phillips and Pastor Greg Robbins officiating. Burial will be at Oakwood Cemetery in Floyd.

Visitation will be at Hauser Funeral Home in Charles City from 3:00 to 6:00 p.m. Sunday, August 27, 2017 and will continue one hour prior to the service at the church on Monday.

Mark Winton Fleming, the son of Winton and Kathryn (Mitchell) Fleming, was born March 23, 1962 in Minnesota. He attended high school in Minnetonka, Minnesota and continued his education at Augustana University in Sioux Falls, South Dakota (for his undergraduate work), the Hartford School of Music in Hartford, Connecticut (receiving his Master’s Degree in music composition) and The University of Northern Iowa in Cedar Falls, Iowa (earning his teaching certificate with post-Master’s Degree studies).

Mark was united in marriage to Karen Scopetski on May 17, 1986 in Farmington, Connecticut. This union was blessed with four children: Bethany, Priscilla, Elizabeth and Daniel. Karen passed away July 16, 2013. On October 29, 2016, Mark married Christine (Thompson) Anderson and the couple made their home in Nora Springs.

Mark was a loving, generous, compassionate and faith filled man of God. He was an entrepreneur who worked in several areas of music: piano tuning, private lessons, instrument repair and instrument sales just to name a few. In the last decade, Mark owned and operated Mark’s Music Studio in Mason City, a storefront that allowed Mark to reach many others with his talent. He was also an Adjunct Professor at NIACC in Mason City which enabled him to be an even greater influence to many musicians in several North Iowa communities. Mark shared his love for Jesus and his musical talents with many people.

Mark was a member of the Gospel Lighthouse Church in Floyd where he was very active with the Praise Team and Men’s Groups. He was always generous with his time and had a servant’s heart. Mark loved to play music and jam with anyone who was willing. He collected guitars, had a great sense of humor (one you had to experience to fully enjoy, especially the corny jokes) and he loved to spend quality time with his family and his church family.

He was preceded in death by his parents and his first wife, Karen.

In lieu of flowers memorials may be directed to the family for future use in inspiring music in others.
Hauser Funeral Home, (641) 228-2323, in Charles City, is in charge of local arrangements. Online condolences may be left for the family at www.hauserfh.com.