CLEAR LAKE – A Mason City man who punched and seriously injured a young woman last year in Iowa City has been sent to jail for 30 days in a plea deal in that case – and then promptly arrested again at an underage party in Clear Lake.

Iowa City police officers were called to investigate an incident that took place Saturday, September 10, 2016 at about 9:03 PM. According to a police report, a male assaulted a female near Burlington and Governor streets, not far from the downtown area. Witnesses identified Jefferson Michael Billick – now 19 years old – of Mason City as the male suspect. Witnesses told police that Billick threw the female victim – a female from Mason City who NIT is not naming – to the ground “and then punched her in the mouth causing one of her teeth to fall out. The victim complained of pain, had a tooth missing and said it felt like some of her other teeth had been moved.”

Billick, a 2016 graduate of Mason City High School, was arrested on a serious misdemeanor charge of assault causing bodily injury and a charge of willful injury causing serious injury and taken to the county jail.

NIT is told that the victim, an accomplished 2015 graduate of Mason City High School, suffered a broken jaw in three places. According to our source, the incident began with an argument over a bill at Buffalo Wild Wings.

Earlier this year, Billick entered into a guilty plea deal. He pled guilty to assault with intent to inflict serious injury and the charge of assault causing serious injury was dropped. On July 20, Billick was sentenced to 180 days in jail with all but 30 suspended. He must pay $3,746.81 in court fines, fees and restitution to the victim. He was also put on probation for one year.

Billick was jailed and awaits a court appearance in both counties. 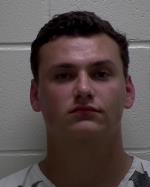