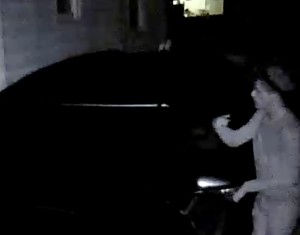 MASON CITY – Police say they have video of a male suspect burglarizing a car in Mason City, and are seeking clues from the public as to his identity.

On the early morning of July 14, 2017, a car was burglarized in Mason City near 9th Street and South Carolina Avenue. Police say they have been unable to identify the subject in the video.

Anyone with information on the subject in the video is asked to contact the Mason City Police Department at 641-421-3636.