OSAGE – A woman police say is homeless is accused of a range of crimes in Osage.

Sarah Michele Ridge, age 37 who is listed by police as living in a homeless shelter in Mason City, was arrested at the Cerro Gordo county jail by Osage police on July 7 on arrest warrants. She is accused by Osage police of burglary of a vehicle and unauthorized use of a credit card under $1,000 for crimes she allegedly committed on June 25. Additionally, Osage police say she committed an assault on July 2 and possessed marijuana an June 17.

Ridge was appointed a public defender and released from jail on July 8. However, records show she apparently failed to appear for a hearing on July 14, and another arrest warrant has been issued for her at this time. 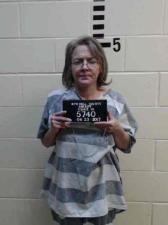